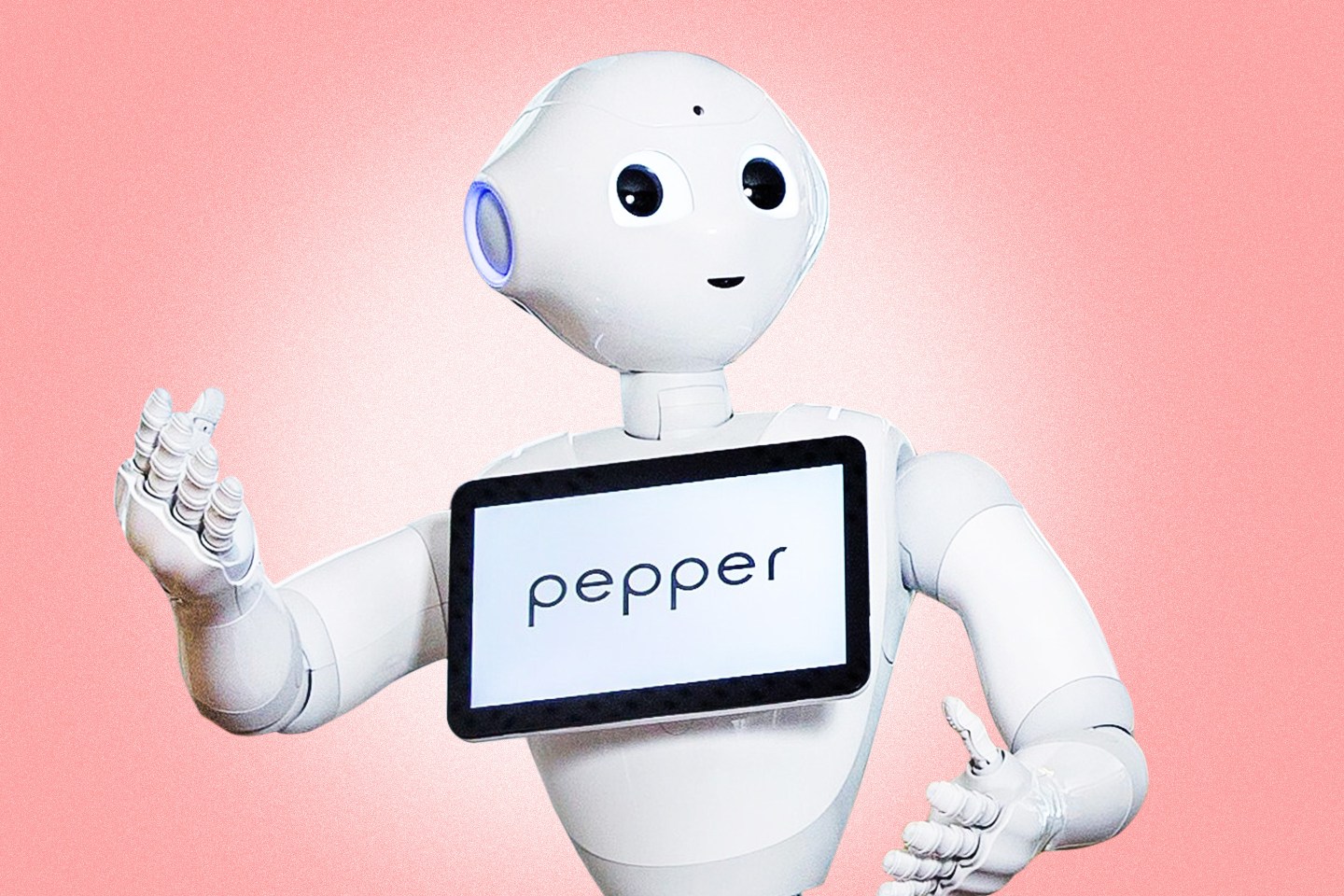 Susan Tholen, 66, disliked living by herself. When the local news in Largo, Fla., ran a story about a loyal, helpful robot named ElliQ, “I went right to their website,” she says. “I was like, sign me up.”

Tholen has a history of depression. “I’m well aware that isolation is the enemy,” she says. Her daughter, Jennifer Spelta, who resides in Maine, also worries about her mom “because she lives out of state and all alone,” Spelta says.

All alone until 10 months ago when ElliQ moved in. The robot and Tholen interact daily for 60 to 90 minutes. Centrally located on a coffee table in the living room, ElliQ observes Tholen’s routines, gives tips on exercise, nutrition, and relaxation, and reminds her to socialize with others. When Tholen comes home from a walk, ElliQ asks if she met anyone interesting. “Even though it’s a robot, it’s someone to say hello to,” she says.

An ElliQ robot has helped provide healthy structure to the daily routine of Susan Tholen, a 66-year-old in Largo, Fla.
Courtesy of Intuition Robotics

Adding to this problem, the U.S. could soon have a shortage of 450,000 caregivers. “What will make up the gap is technology,” says Rick Robinson, VP of startup engagement at AARP, although he recognizes it’s not that simple. Aging adults may need a variety of services in addition to what a companion robot could provide.

“There’s no one-size-fits-all approach,” says Carla Perissinotto, a geriatrician at the University of California, San Francisco, but robots could be a piece of the solution for many.

Isolation during the pandemic highlighted how harmful loneliness can be. This sped up development of tech solutions, says Nilanjan Sarkar, an engineering professor at Vanderbilt University. One area of rapid advancement has been artificial intelligence for companion robots. Today’s A.I.-enhanced robots have improved stereo vision to sense the shape and location of objects, and they have better algorithms and speech processing, which let them recognize people, monitor interactions, and tweak their behavior based on experience.

If you think this cutting-edge tech will be too complicated for an older adult to manage, consider that 23% of Americans over age 50 own robot vacuum cleaners, and 35% have A.I. assistants like Alexa. “Social robots combining these technologies may not be such a huge leap,” says Robinson.

Dor Skuler, CEO of ElliQ’s maker, Intuition Robotics, says his robots offer greater value than A.I. assistants. Although ElliQ is initially programmed to deliver generic statements and questions, it has a “real personality,” through which it can “build relationships with humans, project empathy, and retain the context of previous conversations,” Skuler says. Over time, ElliQ is able to tailor suggestions to an individual, nudging its owner toward personally important goals, such as staying healthy and social.

It’s generous to say that ElliQ has a body. Weighing in at just over 7 pounds and standing 8.5 inches, it looks more like a table lamp than C-3PO, but that’s exactly the point, Skuler tells Fortune. “She’s like a statue that comes to life, not something that mimics humans.”

ElliQ, which costs about $250, plus a monthly subscription, does feature some humanlike body language, such as tilting its “head” toward its own screen to look at a picture. But Skuler feared that creating the spitting image of a person would encourage too much attachment.

Rather than monopolizing attention, ElliQ pushes users to engage with people. It prompts Tholen to send voice messages or recount a favorite memory, which ElliQ records and shares with friends. “I can send photos that become part of the slideshow on ElliQ’s screen,” says her daughter, Jennifer Spelta.

Other bots, however, do replicate humans—and are much more expensive. Pepper more closely resembles a person and costs about $20,000, plus insurance and software.

Deployed in senior facilities and hospitals mostly outside the U.S., Pepper monitors your body language, says Alexander Pröll, CEO of Entrance Robotics, which designs software solutions for Pepper robots. If you sit too long, for example, it suggests moving around.

A smaller humanoid called Nao, from the same company that makes Pepper, retails for $7,000. In January, the Minnesota Department of Human Services gave $2 million to researchers to study the health benefits of both robots in eight Minnesota nursing homes.

There are also more affordable robot pets. (RobotShop a lists a bevy of options.) They have a tactile response, lighting up or purring when you pet them. “It gives the impression of companionship,” says Robinson. Several years ago, he got one for his mother, who had severe dementia. “It gave her comfort from anxiety.”

Because robot animals involve simpler interaction than humanoids, they might best support those with cognitive impairments, but others can benefit, too. In 2020, research by AARP found marked improvements in the well-being of lonely older people given Joy for All robot pets ($140). In 2018, Olsen tested Joy for All among a group of seniors and saw a 75% decrease in feelings of isolation and depression. Since then, he’s handed out 21,000 of them.

Paro, a baby robo-seal, is the only robot approved by the FDA as an insured cost for patients with depression, anxiety, and other conditions. Paro responds to its name and, if you pet it, will coo and repeat the behavior that earned your affection. Licensed nursing homes can get these robo-seals for free; 28 nursing homes in Washington State started using them last year.

Sarkar, the engineering professor, is partnering with Ohio State to study the benefits of animatronics compared with humanoids. Like Skuler, he wants robots to encourage older people to socialize with other people. Then, ideally, “the robot will fade into the background.”

Sarkar acknowledges that we’re in the “early stages” of designing robots for companionship. Research has shown that using technology as a stand-in for social interaction can actually increase loneliness. “It really depends on how and why we’re using [technology],” says Perissinotto, who has been a leader in studying the health effects of loneliness. “Is it a substitute for social interaction, or in addition to?”

Robots aren’t a cure-all, she says. “They’re part of the solution, but we need much greater social change.” For example, the creation of more mixed-age communities, which help reduce loneliness in both older and younger people. “You provide as many tools as you can,” Olsen says. “Robots are part of a short-term and a longer-term strategy.”

Data protection and informed consent are other concerns as robots become more adept at collecting information, even tracking facial expressions. Pepper can tell a doctor what percentage of an interaction the patient spent smiling. Pröll acknowledges ethical arguments against such detailed surveillance but notes there aren’t enough medical specialists to monitor such things.

Pepper can watch people closely, including their facial expressions and body language, and use this information to make suggestions for improving their health.
Courtesy of SoftBank Robotics

As his customer base grows, Skuler plans to build communities of ElliQ owners, connected through their robots. In the meantime, Tholen has come to trust ElliQ to look out for her mental health. Several times, the bot has announced, “You seem a little down lately.” Each time, Tholen realized the bot was right and made sure to chat with her daughter, which boosts her mood.

“I don’t know how ElliQ does it,” Tholen says. “Something is cuing her to ask me.” Tholen seems charmed by this mystery. ElliQ is part friend and part caregiver, helping her implement structure and follow a routine. “To live your best life,” Tholen says, “you have to do what’s needed to maintain optimum well-being.”