Snap wants to be more than a social media company. Will it ever fulfill that promise? 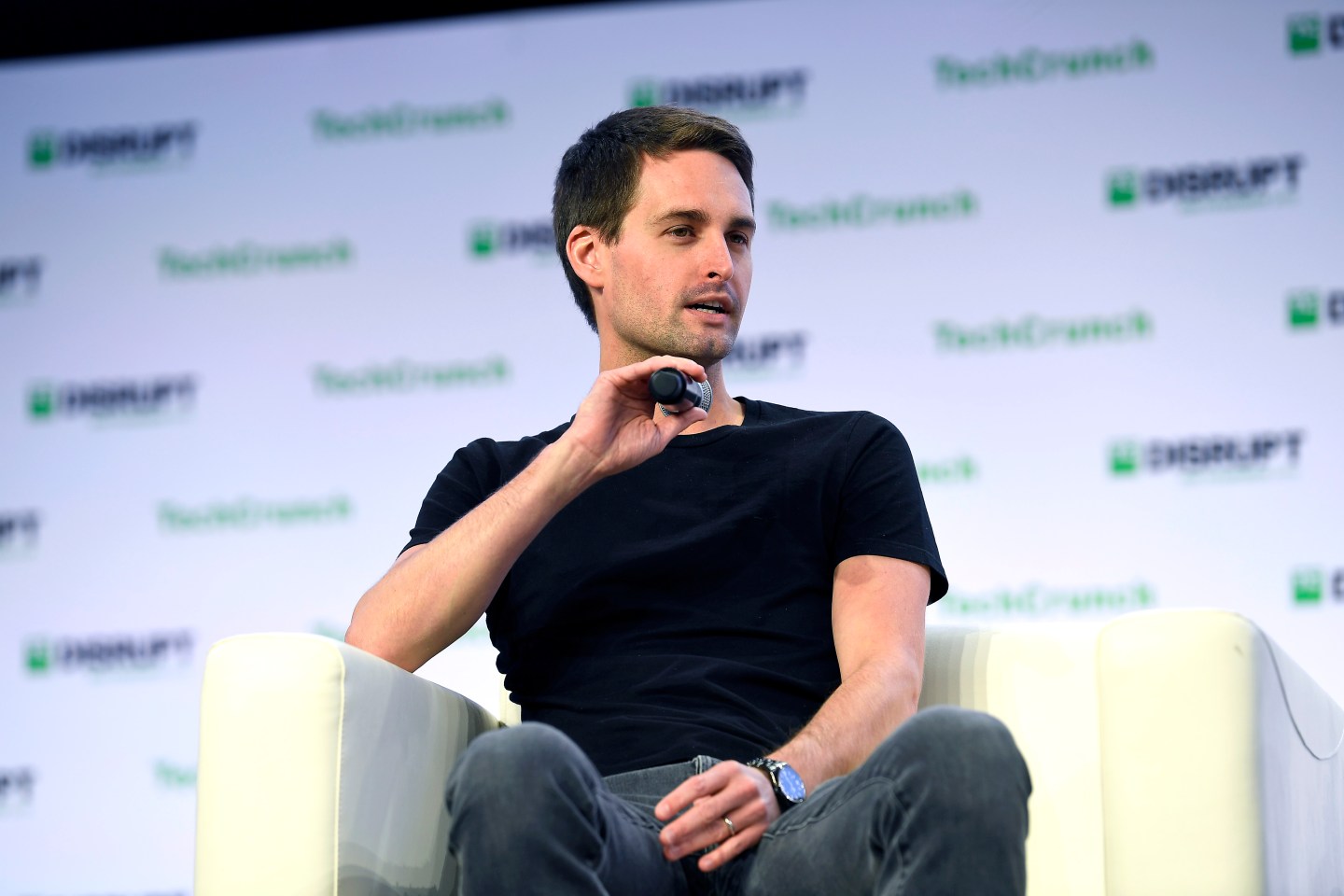 Hey there, Data Sheet readers. You may have noticed that Thursday’s edition never arrived in your inbox. Owing to an error on my part, yesterday’s issue was published online, but the newsletter never got sent to subscribers.

If you’d like to revisit Thursday’s dispatch, which covered TikTok’s budding efforts to expand its business reach, you can read it by clicking here. My sincere apologies for the error. And now, here’s today’s edition…

In the latest blow to Snap’s hopes of making money off something other than advertising, CEO Evan Spiegel told employees recently that the company is scrapping any future updates to its Pixy flying camera drone, the Wall Street Journal reported Thursday. While the drone received largely positive reviews and appeared to sell at a decent enough clip following its release four months ago, Spiegel reportedly deemed the project to be a luxury amid Snap’s financial tumult.

The demise of Pixy adds to the frustration of Snap leaders still hoping to diversify their business, a multiyear effort that has borne virtually no fruit. The lack of success in these endeavors presents existential questions about Snap’s ability to grow beyond its core business, which faces immense pressure from larger competitors and ever-changing economic conditions.

The company is coming off its worst quarter of sales growth since going public in 2017; executives declined in July to issue guidance for the current quarter; and its stock is down 73% year to date. The upheaval primarily stems from a pullback in ad spending amid global economic uncertainty, as well as recent changes to Apple’s privacy protocols that have made it harder for social media companies to deliver highly targeted ads.

In a nod to their diversification aspirations, Snap executives have gone to great lengths for several years to emphasize that their outfit is a camera company—not an advertising or social media company. This despite 99% of Snap’s revenue last year coming from ads on its Snapchat social media platform.

The camera certainly has been central to Snapchat’s evolution from a photo-sharing tool, to a video-sharing platform, to an augmented reality destination. But in Spiegel’s telling, the emphasis on cameras opens new avenues for Snap to expand.

That approach has, to date, manifested itself in two hardware products: Spectacles, a series of four pairs of camera-equipped glasses, and the Pixy drone. And so far, neither have taken off.

The first line of Spectacles, released in 2017, was an out-and-out flop. Two subsequent generations of Spectacles were similarly underwhelming, while the latest, augmented-reality–enabled pair isn’t available for purchase. (Only creators can receive a pair from Snap.)

Snap executives were more circumspect in their hopes for Pixy, a high-tech flying selfie stick that retailed at $230. Spiegel told The Verge in April that he just wanted to “get it in people’s hands and have them play around with it.” If customers liked the product, Snap would make a second version. Clearly, in this economic landscape, not enough did.

Spiegel and his team deserve a pinch of praise for their ambition. Snap leaders haven’t been afraid to roll out products equipped with truly cutting-edge technology—even if they weren’t quite ready for prime time.

At some point, however, Snap needs to secure a home-run product if it’s ever going to be more than a social media company.

While Spectacles and Pixy undoubtedly contained cool features, neither offered much in the way of usefulness. Insider reported in 2017 that Snap’s internal data showed most Spectacles buyers only wore the glasses for a few weeks before stowing them away. And Pixy is a fun little toy, but its slight frame and minimal battery life limited its functionality.

Snap could take lessons from both products and apply them to more utilitarian augmented and virtual reality efforts, a sector ripe for potential riches in the coming decade.

Yet any head start that Snap had is quickly getting closed by deeper-pocketed competitors. Apple, Google, Facebook parent Meta, and Microsoft are all developing some form of wearable mixed-reality hardware, with each company capable of easily outspending Snap on research and development. Meta alone spent $3.2 billion in the prior quarter on its augmented and virtual reality division, six times as much as Snap’s companywide R&D expenses for the quarter. Snap’s announcement in July of a substantial reduction in its hiring growth rate won’t help, either.

Try as it might, Snap just can’t escape its reality as an ad-driven app outfit—and a struggling one at that. With Wall Street bailing and rivals rising, the window for Snap’s picture-perfect ending keeps narrowing. After Spectacles and Pixy, the third try—if there is one—had better be the charm.

Pushing them out the back door. Crypto.com has quietly laid off hundreds of employees in recent weeks, on top of the 5% reduction in its workforce announced in June, The Verge reported Thursday. Sources inside and outside the cryptocurrency exchange told The Verge that staffers were unexpectedly disappearing from the company ranks, with no notice given to remaining employees about the extent of the layoffs. Crypto companies have aggressively cut costs and reduced hiring over the past few months following a sharp downturn in digital asset values.

Don’t ignore this update. Apple issued a warning to many iPhone, iPad, and Mac users that security vulnerabilities could allow hackers to gain control of their devices, the Associated Press reported Thursday. Apple officials did not disclose how many customers were at risk or how many users had been subject to hacks, though the company has issued software updates designed to fix the issues. The tech giant said an anonymous researcher discovered the flaws.

Joining the fold. Walmart is acquiring the labor management company that has powered its gig economy delivery service in what is the retail giant’s latest move to bring more logistics operations in-house, Insider reported Thursday. Delivery Drivers has managed thousands of gig workers connected to Walmart’s Spark service for the past four years, facilitating nearly three-quarters of all Walmart delivery orders. Terms of the deal were not disclosed.

Putting heat on Celsius. When Enron and Lehman Brothers went belly-up under suspicious circumstances, federal officials successfully lobbied bankruptcy judges to appoint an independent examiner to dig into what the heck happened. The U.S. government is now seeking the same kind of inquiry into Celsius Network, the cryptocurrency lender that spectacularly collapsed this summer, CoinDesk reported. The U.S. Trustee Program, a division of the Department of Justice that oversees some bankruptcy cases, said numerous questions remain unanswered about Celsius’s operations, management, and financial demise. Celsius, which reported $25 billion in assets under management in October 2021, filed for bankruptcy last month after its high-risk strategies backfired amid a dramatic drop in crypto values.

An independent probe, which the judge overseeing the case would have to approve, would answer questions about the company’s financials and address “significant transparency issues” in the bankruptcy case, according to the filing.

“There is no real understanding among customers, parties in interest and the public as to the type or actual value of crypto held by the Debtors or where it is held,” the U.S. Trustee said.

The recent crackdown on Tornado Cash sets a dangerous precedent. Here’s why it could be the beginning of an all-out ‘war on code,’ by Alex Tapscott

Theranos victims asked to weigh in on sentencing for Elizabeth Holmes and Sunny Balwani, by Joel Rosenblatt and Bloomberg

Hollywood’s less-than-finest. If you’re unsatisfied by a quick shout-out from a C-list celeb, Cameo has your back (again). The celebrity connection service, which lets users receive a recorded video or participate in a live chat, is reviving an extended video call option on its platform, The Verge reported Thursday. This time, groups of up to 10 people can spend 10 minutes on the line with an eclectic mix of fringe VIPs. The latest lineup includes opinion-splitting saxophonist Kenny G, Happy Gilmore villain Shooter McGavin (Christopher McDonald IRL), and NFL legend Brett Favre (he might need the money). And yes, American Idol contestant William Hung and Seinfeld antagonist Wayne Knight will be there, because William Hung and Wayne Knight are always there. Cameo has tried and scrapped the 10-minute chat before, so it’s a little hazy as to why the company is bringing the feature back. Though after laying off about a quarter of its staff earlier this year, Cameo also might need the money.