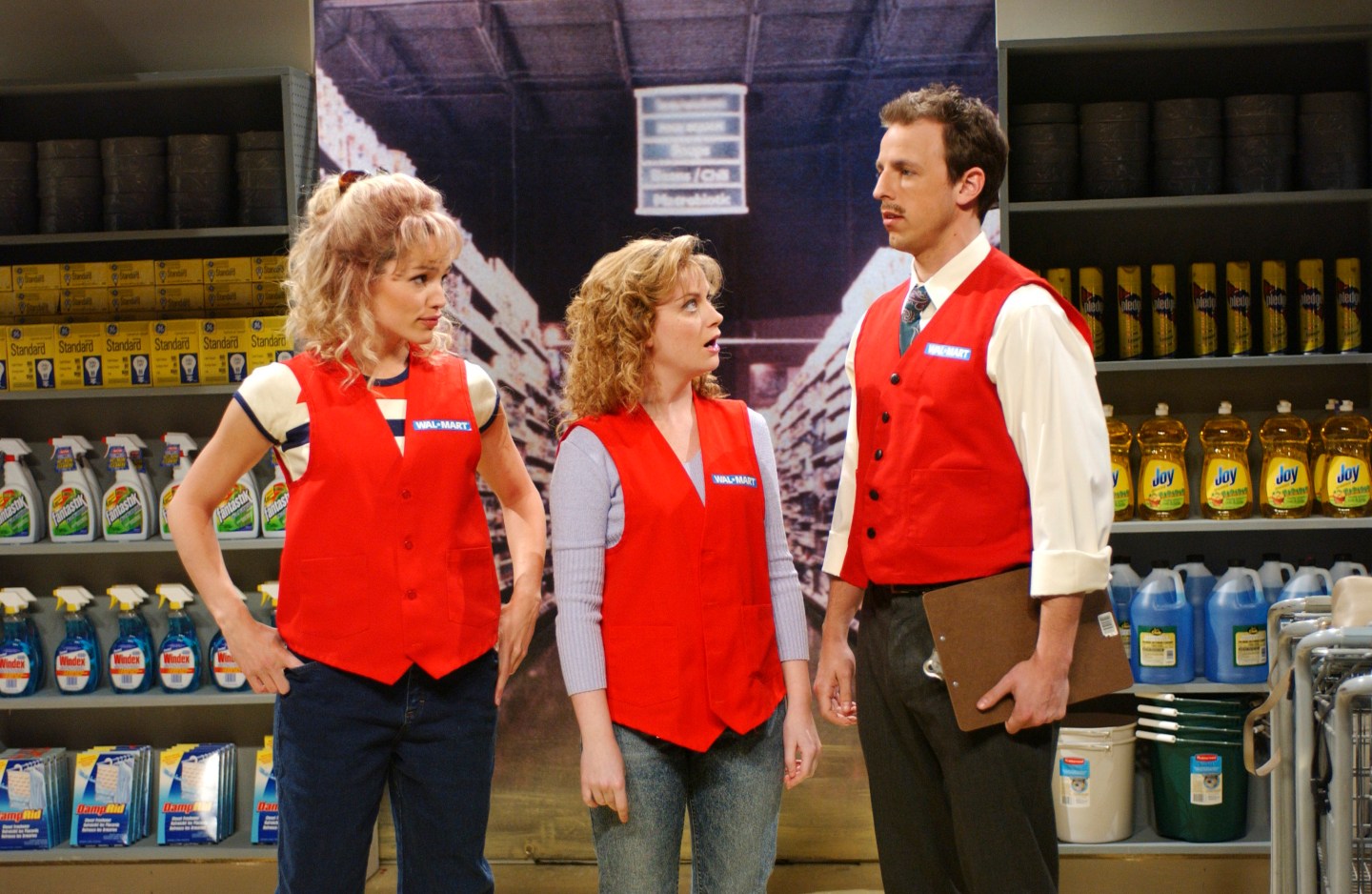 In its bid to challenge Amazon for e-commerce glory, Walmart had a chance this month to make a big splash.

Among this trio of potential partners, one name stood out: Disney. The company is now the largest streaming provider in the world, with three platforms—Disney+, Hulu, and ESPN+—that combine nearly 100 million subscribers in the U.S. and Canada. Most important, Disney’s streaming services still have room to grow, making a Walmart+ bundle all the more attractive. Paramount+ and Peacock, by contrast, offer a middling content library, underwhelming intellectual property, and less subscriber growth potential.

Finally, the news came down on Monday: Walmart had chosen its streaming sidekick, and the winner was…Paramount.

The decision was fine, I guess. Totally fine. Not quite a splash, but not quite a thud.

In fact, it’s the kind of deal that’s come to represent the averageness of Walmart’s attempt to rival Amazon, an effort that has yet to produce much evidence that Andy Jassy and company should worry about the barons of Bentonville.

Amazon Prime also provides a better value at the moment than Walmart+, despite a higher price point ($139 per year versus $98 per year in the U.S.).

Amazon Prime offers same-day delivery on 3 million items, features a better third-party seller marketplace, and includes streaming video, streaming audio, and gaming features. By contrast, Walmart+ offered same-day delivery on 160,000 items as of 2020 (company officials haven’t updated that number), and it currently provides a 10 cents per gallon discount at some gas stations and a free six-month subscription to Spotify.

Walmart officials have argued that the company has some leverage points for taking on Amazon.

CNBC reported in June that executives believe the company’s vast web of Walmart stores—about 90% of Americans live within 10 miles of one—will become vital hubs for e-commerce activity, with delivery drivers and drones taking off from them. Walmart leaders also hope to capitalize on the company’s position as the nation’s largest grocery retailer by volume, recently introducing a separate, snazzy subscription feature in which delivery drivers will put your online-ordered groceries directly into your refrigerator.

Still, those nascent efforts likely will take years to build up, giving Amazon an opportunity to emulate and exceed those perks.

Beyond the CBS suite of series (admittedly, decently valuable content for Walmart’s core demographic), Paramount+ primarily features the Star Trek franchise, some Nickelodeon shows, a few low-profile original series, and a bunch of niche programming. Viewers have already spoken about their appetite for Paramount+, which reached a mere 43 million subscribers in June despite one of the lowest price points in the streaming market. The service trails well behind Netflix, Disney, Amazon Prime Video, and HBO Max.

Terms of the Paramount deal haven’t been announced, so it’s possible the addition represents a low-cost proposition for Walmart. Even so, Walmart will need much more than a middle-of-the-road streaming service if it ever wants to seriously compete with Amazon.

An eye on algorithms. Oracle will be regularly reviewing TikTok’s algorithms to ensure Chinese government officials are not interfering with them, a move designed to assuage U.S. lawmakers concerned about their chief geopolitical foe manipulating the social media platform, Axios reported Tuesday. The agreement marks an expansion of ties between TikTok parent ByteDance and Oracle, which now houses all of TikTok’s U.S. user data on its cloud infrastructure. Federal policymakers have voiced concern that the Chinese government could alter TikTok’s algorithms to deliver pro-China messaging to American users, though ByteDance officials said they would not allow such interference.

Some friendly advice. Activist investor and hedge fund Third Point on Monday called on Disney to make major changes to its business operations and board of directors, arguing the company “significantly underearns relative to its potential.” In a letter to Disney CEO Bob Chapek, Third Point CEO and chief investment officer Daniel Loeb wrote that the entertainment giant should significantly cut costs, spin off ESPN into a separate business, and replace some board members, among other changes. Disney officials defended the company’s board and highlighted recent financial performance in response to Loeb’s letter.

A massive sales order. Chinese tech behemoth Tencent plans to unload most or all of its $24 billion stake in food-delivery powerhouse Meituan, a move that follows recent efforts by government regulators to curb the power of large tech companies in the republic, Reuters reported Tuesday. Tencent, best known as the company behind ubiquitous Chinese app WeChat, owns about 17% of Meituan. Hong Kong–listed shares of Meituan fell 9% Tuesday in light of the Reuters report.

Back to the salt mines. Apple notified employees Monday that the company expects workers to spend three days per week in corporate offices, an increase from its current two-days-a-week policy, Bloomberg reported. The tech giant set a Sept. 5 deadline for the updated in-office mandate in Silicon Valley, with offices outside its main headquarters expected to adopt the requirement soon after. Apple has moved more cautiously than most large tech companies in bringing employees back into offices amid sporadic COVID-19 outbreaks.

Checks and balances. For proof that there are second acts in American life, look no further than WeWork cofounder Adam Neumann. Just three years after the spectacular collapse of WeWork’s IPO under Neumann’s leadership, venture capital titan Andreessen Horowitz disclosed Monday that it’s investing about $350 million in a new residential real estate venture from the once-tarnished entrepreneur. As TechCrunch reported, the announcement produced a mix of eye rolls and anger from the tech community—along with a few contrarian “I get it” takes. The investment also reignited debates about race and gender in Silicon Valley given that the two principal parties involved—Neumann and Andreessen Horowitz cofounder Marc Andreessen—are white men.

While details remain sparse, the development has met with a range of opinions from early-stage investors, whose entire job it is to back outlier founders with high chances of success. Some say that this is the exact point of the venture asset class—backing bold founders—while others note that Neumann’s second chance comes as women and founders of color struggle more than ever to get starter capital.

Neumann’s track record at WeWork can be viewed differently depending on who you ask. Much has been made of the cultural malaise at the company. Neumann spent investor cash on copious amounts of booze for the office, a school for his wife’s vanity project and a wave pool, but when the business finally imploded ahead of its long-planned IPO, Neumann wasn’t the one left holding the bag.

The U.S. accused a Chinese MIT professor of spying. Now cleared, he helped discover what may be the ‘best semiconductor material ever found,’ by Nicholas Gordon

Apple employee claims managers are threatening to fire her over viral TikTok video, by Alice Hearing

Polyester-cotton blends are cheap, long lasting—and account for half of textile waste. A relaunched biofuel startup has invented a way to recycle them into new threads, by Ian Mount

Ether is strong but Bitcoin drops below $24,000, by Lyllah Ledesma and CoinDesk

Moving in unison. Amazon executives might want to take a look at activist TikTok today. The Washington Post reported Tuesday that about 70 TikTok influencers, in collaboration with the digital advocacy group Gen-Z for Change, have committed to ending their relationship with the e-commerce giant until it reverses its anti-union practices. While the group’s demands might elicit guffaws from Amazon—a $30-per-hour minimum wage for all Amazon workers ain’t happening anytime soon—the collective of creators boasts about 51 million followers on one of the most popular apps among younger demographics. The campaign follows a successful union drive at a New York City warehouse earlier this year, during which Amazon officials disparaged organizers and aggressively fought unionization activities. However, other organized labor efforts have stalled in recent months, blunting unionizing momentum.