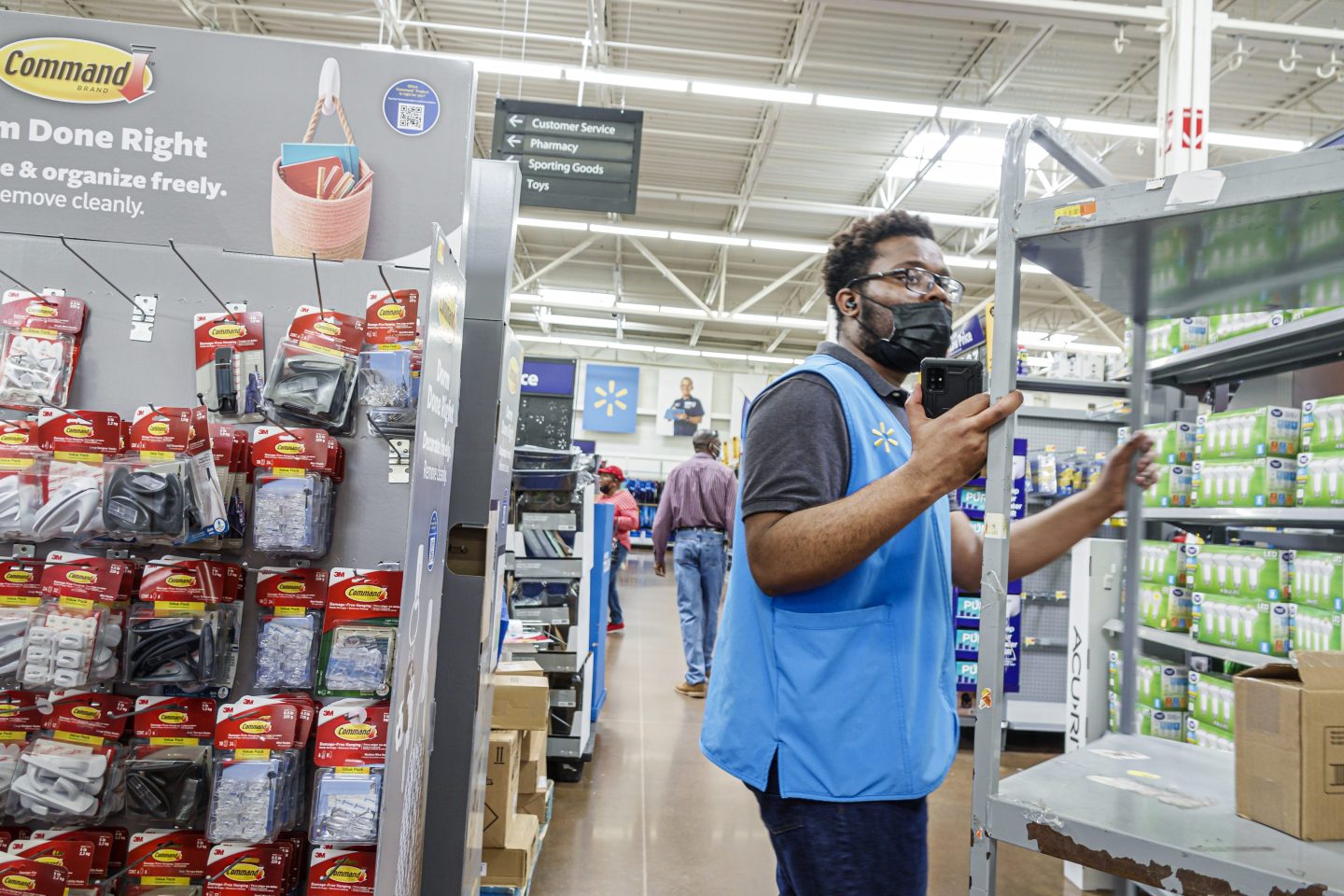 Hybrid work is winning at the top 10 Fortune 500 companies.

Most have yet to implement an official remote-only or in-person-only strategy, instead easing hesitant workers back into the office with a hybrid policy. But many have been operating in a tale of two cities, forcing retail workers back to the frontlines a year before requiring corporate employees to return to the office.

From Walmart to Amazon, here’s a breakdown of the top 10 Fortune 500’s return-to-office policies.

Walmart’s retail workers, referred to as in-house associates, worked through the pandemic while its corporate workers worked from home for over a year. Walmart released a company memo in October 2021 stating that corporate employees would transition to coming into the office on a “more regular basis” in November.

But Walmart’s 10,000 tech employees were excluded from the decision; the company announced in May 2020 that this largely Silicon Valley-based group could work remotely indefinitely as the pandemic waned.

A spokesperson for the company tells Fortune campus-office associates have been coming into the office more regularly since February. In a February email Walmart provided to Fortune, Donna Morris, chief people officer, said it’s the company’s intention to create a collaborative environment on campus while working toward more flexibility.

“Our ways of working will vary across teams,” she wrote. “We believe it’s important that we aren’t overly prescriptive, and in the nature of flexibility, we all need to be open to ambiguity. We will not mandate in and out of office days or start and finish times.”

She left it open to bosses to decide what meetings can be attended in-person and on-campus, but added that the company believes “it’s important to be together in our offices the majority of the time,” writing that Walmart’s culture, leadership, relationship building, and creativity all benefit when workers are together.

Amazon delivery and warehouse workers continued to provide goods throughout lockdown, reportedly dealing with grueling conditions while corporate employees worked from home. In October 2021, Amazon CEO Andy Jassy explained in a company memo that Amazon continues to be in “a stage of experimenting, learning, and adjusting for a while as we emerge from this pandemic.”

In said company memo, which Amazon referred Fortune to when asked for comment, Jassy allows directors on individual teams to decide how many days their reports should come into the office. Jassy maintained that the company is flexible, but that Amazon workers should live close enough to their office to come in within a day’s notice.

CEO Tim Cook has pushed corporate employees slowly back to the office under a hybrid model.

“For many of you, I know that returning to the office represents a long-awaited milestone and a positive sign that we can engage more fully with the colleagues who play such an important role in our lives,” Cook said. “For others, it may also be an unsettling change.”

Employees were asked to come into the office beginning April 11th, reaching a minimum of three in-person days by March 23rd. Many employees (about 76%) were dissatisfied, and 56% reported that they were looking to quit.

Though Cook’s previous plans were thwarted by another round of COVID-19 infections, Apple recently announced employees should save the date to come in three times a week starting September 5th.

Many pharmacists and other retail workers stayed in stores during the pandemic to take care of customers’ increasing medical needs, says Erin Britt, director of corporate communications at CVS Health.

Corporate employees were ushered back to the office starting March 15th. “As part of our new hybrid work format, most corporate employees are spending two to three days each week at one of our office locations and working virtually on the other days,” Britt tells Fortune.

UnitedHealth Group has implemented all three work models: “hybrid, fully telecommute, and core on-site,” with an emphasis on flexible work, according to an official statement the company sent Fortune.

The healthcare and insurance company pointed out that they’ve always had both remote and on-site employees, but the bulk of workers right now are mostly hybrid.

“The hybrid model will apply to many of our traditionally office-based employees who will now average about three days per week in the office,” reads the statement. “The hybrid model is flexible and based on manager discretion.”

On-site employees seemingly remained working in person through the pandemic; in March 2020, an article on the company’s site read, “For those employees whose work requires them to be at one of our facilities, we have put additional safety measures in place.”

Employees based in Houston (where Exxon plans to move its headquarters to next year) were expected to return to office five days a week starting mid-May of 2021, according to Bloomberg.

“Most of our Houston-campus employees are back in the office, while continuing to benefit from our workplace flexibility programs,” Todd Spitler, Corporate Media Relations Senior Advisor, tells Fortune. He adds that while the company believes that “business is best run from our offices and workplaces,” there are workforce flexibility programs that can be approved by a supervisor.

Berkshire Hathaway CEO Warren Buffett was one of the first leaders to publicly question if people would ever return to the office after the pandemic. Charlie Munger, vice chairman of Berkshire Hathaway, continued Buffett’s sentiment in February 2022, saying that a large portion of workers who would rather not be in the office would remain that way forever.

There’s no public official statement on the company’s policy, but when Fortune called headquarters, an administrative worker revealed that each branch is making its own decisions with HR on whether employees will return to office.

Alphabet’s subsidiary Google is bringing corporate workers back to headquarters on a hybrid schedule.

Google’s corporate employees were expected to return to the office three days a week starting April 2022. A representative informed Fortune that the decision was made in light of employee feedback. But there’s still room for flexibility, as “employees who need more time before returning can also request a work-from-home extension.”

Feedback on the corporate roll-out of return to office varied based on the employee, but the company has received backlash for its pay adjustments based on where remote workers are located.

McKesson’s frontline healthcare workers continued to work during the pandemic. “During the midst of a pandemic, thousands of Team McKesson members continue to work every day in order to deliver vital medical products to the frontline in the fight against COVID-19,” its website reads.

An Indeed poll of about 4,000 McKesson employees found that 61% said they could work remotely. As of now, the company has advertised both remote and in-person positions. Reviews on Glassdoor from employees emphasize the company’s flexibility; one from March 2022 says, “employs an office as a destination approach, where you go to the office to collaborate, but perform your duties remotely.”

The drug wholesale company is “working under a hybrid model called the ‘Work Smart Platform,’ meaning that team members are encouraged to work from home and come into the office when they desire,” spokeswoman Mackenzie Liberatori told The Mercury in October 2021.

AmerisourceBergen didn’t provide Fortune with details on its return-to-office policies.