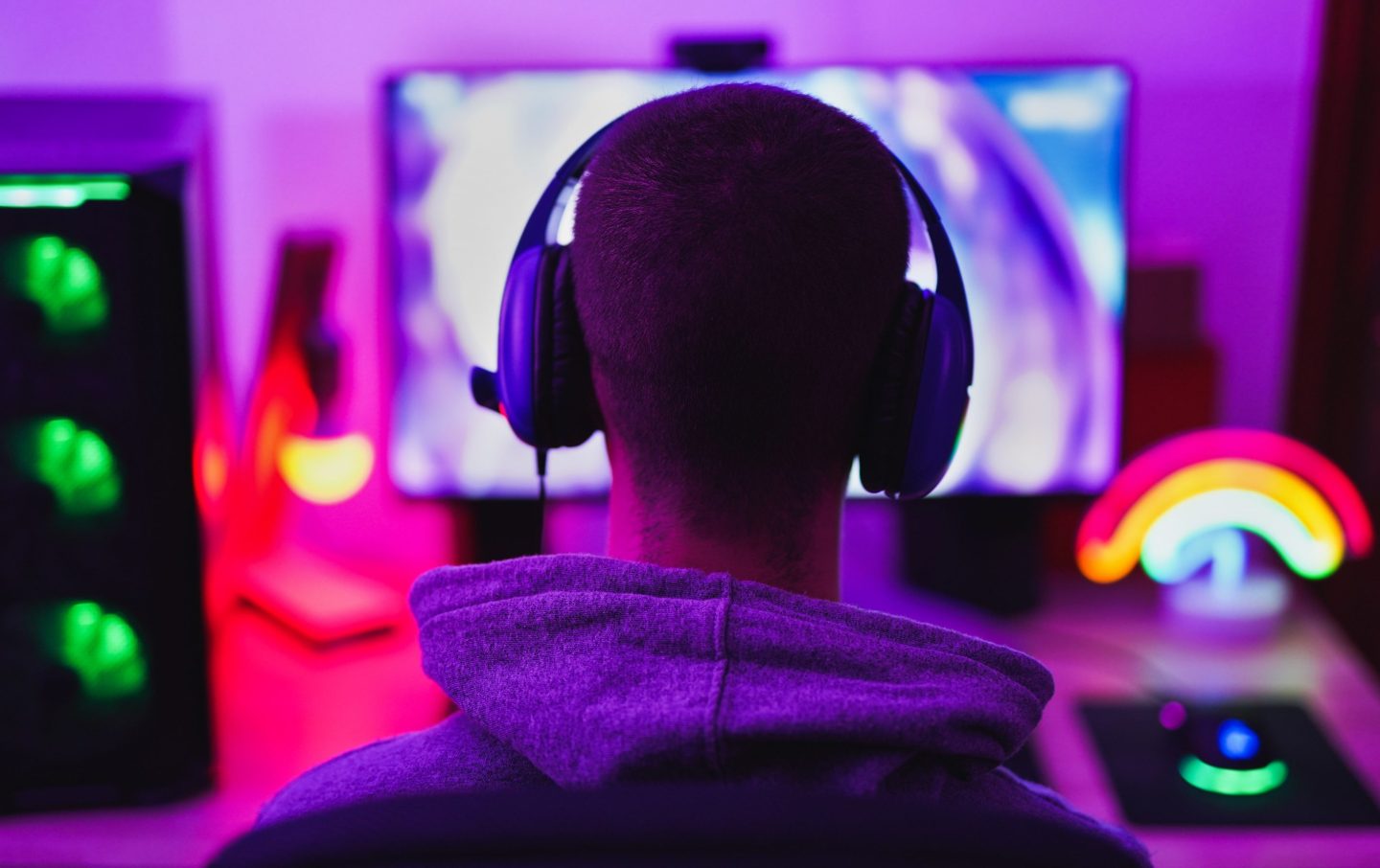 Anxiety and social isolation have been on the rise since the beginning of the pandemic. This might help explain the surge in video games' popularity.
Getty Images

Given the scale of the mental health crisis, and the hundreds of millions of people already playing video games, gaming could be the next game changer for mental health.

Gaming isn’t where most people would think to improve their mental health, but there is no better way to help people improve their lives than meeting them where they are. And where 3 billion people are–more than a third of the world’s population–is on gaming platforms.

Last week, a study of 40,000 gamers from the University of Oxford disproved claims that gaming negatively affects players’ well-being. This is good news for the 226 million people who played video games in the U.S. alone in 2021. In 2020, the video game market surpassed movies and sports combined.

Gaming has long outgrown the stereotype of the teenage boy in the basement. In fact, nearly half of those who play video games are female, and 29% are people of color. One of the fastest-growing demographics is “grey gamers.” Between 2018 and 2021, the number of gamers 55-64 went up by a third.

A surge in popularity

Human beings have a fundamental desire to progress, grow, and evolve, to feel a sense of accomplishment, and then move on to the next goal. Games are incredibly powerful at meeting this essential need.

When I founded Thrive in 2016, at the core of our mission was the direct connection between well-being and performance. The science is clear: When we prioritize our well-being, we perform better–we are more productive, more empathetic, and more creative.

Games give players a sense of progression using skill trees, trophies, achievement levels and higher rankings. By embedding well-being into gaming, we can help people not just lower stress, boost their performance, and rack up wins and achievements within gaming, but also progress and “level up” their overall well-being in the real world. Studies show that gaming also has a wide range of cognitive benefits.

What’s clear is that the need for solutions is growing as fast as the gaming sector. The mental health crisis was already growing years before anybody had ever heard of COVID-19–and it’s only gotten worse during the pandemic. According to the World Health Organization, in the first year of the pandemic, global rates of anxiety and depression shot up by 25%.

A recent study by the Kaiser Family Foundation found that by the summer of 2022, 32.8% of adults reported symptoms of anxiety or depressive disorder, nearly triple the 11% percent rate in the year before the pandemic. And between 2020 and February 2022, Google searches for same-day mental health services grew by 1,300%. Meanwhile, gaming surged in popularity, with the video game market growing 23% during the pandemic.

For example, a 2021 study by researchers from the University of Limerick in Ireland found that video games are a useful tool to lower the severity of depression and anxiety, and that games should be considered a “potential alternative for the improvement of various aspects of mental health globally.” In 2020, the FDA approved for the first time a video game as a therapeutic, giving the green light for a racing game called Endeavor RX to be prescribed to children with ADHD.

This year saw the public launch of DeepWell, a startup creating games specifically meant to address mental health. Their first game, intended to treat mild and moderate depression, anxiety, and hypertension, is slated for 2023.

Another game that’s widened the mental health conversation is Hellblade: Senua’s Sacrifice. It was developed by UK-based studio Ninja Theory, in partnership with Cambridge neuroscientist Paul Fletcher, with the goal of putting players inside the mind of someone with mental illness. The game immediately struck a chord: It was honored with five BAFTAs (the U.K. equivalent of the Oscars) and an award from the Royal College of Psychiatrists.

But it was the response from the public that meant the most to developers. “We achieved success from whichever perspective you look at it, and that’s great,” Ninja Theory studio head Dom Matthews says. “But by far the most fulfilling of those successes is meeting those people and reading comments from people about how the game impacted them.”

Next up for the team is The Insight Project, a collaboration using biometric sensors to create games that will give people “insight” into their mental health and tools to manage it. “We want to create games that can change people’s lives,” says Ninja Theory chief creative director Tameem Antoniades. “If you can see what’s happening inside your mind, then you can remove yourself from the symptoms and view it in a new light.”

As Tim Schafer, the creator of Psychonauts, another game praised for its portrayal of those dealing with mental health issues, put it, “I think gaming is a proxy for facing troubles in your own life–it’s a very low-stakes way to experience emotions and anxieties and go through them in a safe way and build up the capacity to do that in the real world.”

Addiction can of course be a problem. According to the World Health Organization about three percent of gamers meet its definition of having a “gaming disorder.” Bullying and harassment are also problems the gaming community continues to face.

A need for connection

For Sarah Bond, Xbox’s corporate VP of game creator experience and ecosystem, the key to realizing the full power of gaming is empathy. “In today’s world the need for shared understanding of each other is both more difficult to attain but also more important than ever,” she said in a talk at this year’s SXSW.

Bond calls play an “empathy amplifier” that we’re biologically wired for. Games give us the chance to collaborate, connect with others, and connect with ourselves in ways that we couldn’t otherwise.

“By playing we can actually nurture and care for ourselves, but we can also develop a deep empathy and understanding of humanity as a whole,” Bond says. “And it’s that combination of those two things that can really help us build a better world.” In a recent Microsoft survey of players with disabilities, 84% said gaming had improved their mental health in the past year.

For many people of all ages, gaming provided an essential social outlet during the isolation of the pandemic. A study by researchers at the North Carolina State University found, as professor Nick Taylor put it, “Gaming didn’t eliminate social interaction, it supplemented it.”

In fact, a survey by Pubnub found that 36% of respondents made a long-term friendship while gaming. It’s especially important because the pandemic has accelerated another crisis, one of loneliness. U.S. Surgeon General Vivek Murthy has called it an “epidemic.” A study in December of 2021 commissioned by Cigna found that more than half of U.S. adults (58%) are lonely.

“We should think about loneliness like we think about hunger and thirst–as a natural signal that our body gives us when we’re missing something that we need for survival,” says Murthy. Loneliness is not only associated with higher rates of depression, anxiety, and suicide, but as a study by researchers from Brigham Young University found, it carries a mortality risk equal to smoking 15 cigarettes a day.

There’s also a growing trend of gaming among older people–and it’s encouraging social connections across generations. Nearly a quarter of parents and grandparents in a survey by the Global Web Index said they see gaming with their relatives as “family time.” If you, like me and millions of others, have made Wordle a part of your daily social interactions–not only playing but sharing, comparing, and competing with friends and family–you know the power of games to create special moments of connection.

A study by Tyler Prochnow of Texas A&M University looked at communication about mental health within gaming. It found that gamers who lacked real-world support “might feel more comfortable being their complete self around these individuals online because there’s no risk of blow-back to their close social support networks in ‘real life.’” He acknowledged that this isn’t a substitute for in-person support, but as he put it, “our goal is to offer more in person meet and greets for the community where the gamers can come together and extend that social support network outside of just the online system.”

Gaming is already great at building community, connection, and collaboration. And when it comes to improving mental health and fostering empathy, we’re just beginning to understand how much untapped potential this casual activity has.

Arianna Huffington is the founder and CEO of Thrive.