After two months of lockdown, a Shanghai resident escaped to a tropical island. Now another lockdown means he can’t leave: ‘This is an unsustainable way to live’ 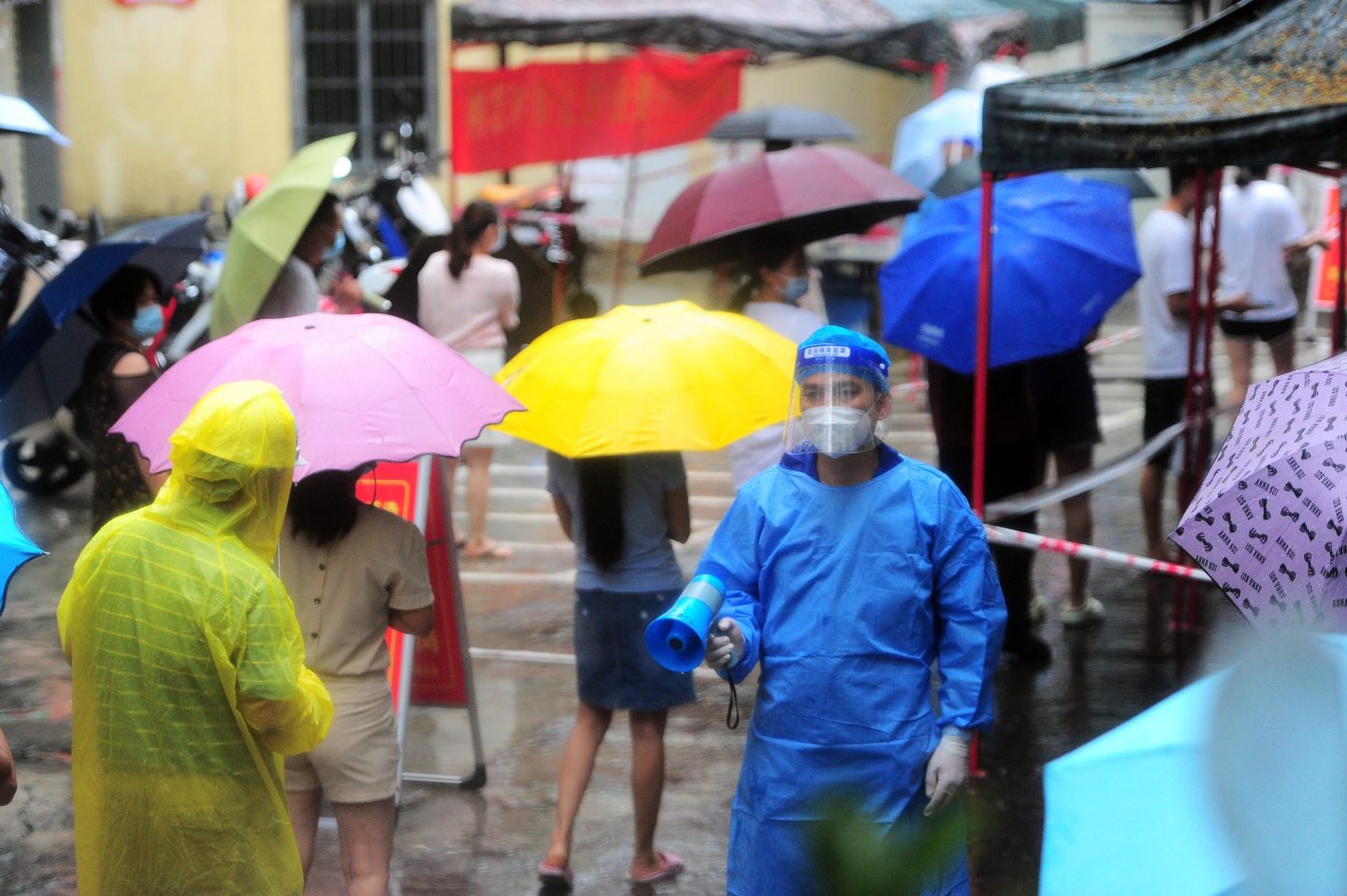 A medical worker holding a megaphone keeps order as residents queue up in rain for COVID-19 nucleic acid tests on August 8, 2022, in Sanya, Hainan Province of China.
Sha Xiaofeng—VCG/Getty Images

George thought that Sanya in Hainan, a tropical island in southern China, would be the perfect place to forget about the two-month lockdown he had just endured in Shanghai.

For a week at the end of July, Sanya proved an ideal getaway. George enjoyed the city’s clear waters, sandy beaches, and all-inclusive resorts. He met up with friends. He finally felt himself relax in what had been one of China’s COVID-19 safe havens.

The island province of Hainan had recorded fewer than 300 cases from the beginning of the pandemic until July of this year, making it one of the least infected areas in China. Keeping COVID out has spared Hainan from the cycles of lockdowns and mass testing that have become commonplace elsewhere in the country.

“I had thought Hainan was a safe space,” says George, a 30-year-old British national who requested Fortune refer to him using a pseudonym to avoid potential backlash from authorities.

But George’s beach vacation turned from tranquil to agonizing in early August. The island began recording dozens of new daily COVID cases, prompting authorities to launch mass testing campaigns and localized lockdowns. After recording hundreds more cases since then, Hainan is now under near-complete lockdown, with most people in Sanya, the provincial capital, unable to leave their homes or hotels except for COVID tests or trips to the grocery store. Flights are also banned from entering or leaving the city, stranding George and over 80,000 other tourists for at least another week, and prompting some travelers to chant “I want to go home” at airport police.

George was supposed to return home early this week. But he’s now stuck in a Marriott, going for periodic walks and COVID tests and unsure when he’ll be allowed to leave. “This is an unsustainable way to live. In the space of two days you can be put under lockdown” no matter where you go, he says.

The rise of Omicron and its highly transmissible subvariants like BA.5 have made outbreaks increasingly common across China. And now, as the variant enters previously COVID-free regions like Hainan, every destination in China is at risk of getting locked down until the government charts a path away from its ultra-strict COVID containment measures.

Chinese authorities seem in no rush to move beyond COVID-zero. Instead, they keep reaching for the same COVID playbook they’ve deployed since Wuhan’s first outbreak.

Hainan authorities blame the outbreak on the fishing trade at a local island port. They believe that some seafood imports were contaminated with COVID-19, which sickened port workers, according to the state-backed China Daily.

For years, Chinese authorities have attributed local COVID outbreaks to imports of foreign goods, starting with the unlikely theory that COVID originated outside of China and was brought into the country via food from overseas. When Omicron was first discovered in China earlier this year, Beijing city officials warned people against receiving international mail on the grounds that parcels could carry the virus. In Hong Kong, authorities culled hamsters after blaming a Dutch critter for a local outbreak.

Experts have long said that it’s highly unlikely that traces of the virus on imported fish or mail are sparking outbreaks, but blaming foreign objects has been an effective way for authorities to deflect responsibility for outbreaks.

China has administered restrictive lockdowns, stopped people from traveling, and deployed mass testing measures every time outbreaks have sprung up since early 2020. More recently, Chinese authorities have attempted to confine lockdowns to specific neighborhoods or even buildings when they find cases. But they also have not shied away from broader citywide lockdowns—such as in Shanghai or Xi’an this year—when outbreaks get out of hand.

Hainan authorities certainly don’t want the island to become the epicenter of a BA.5 outbreak. The highly transmissible Omicron subvariant has quickly become dominant in the U.S. and elsewhere but has not yet gained a foothold in China. Hainan authorities say they are battling BA.5.1.3, a cousin of BA.5 found mostly in Germany.

Before the new outbreak, Hainan’s low COVID case count boosted its status as China’s premier beach destination. The island has also benefited from China’s mostly closed international borders and onerous quarantine requirements that have all but barred Chinese tourists from traveling overseas.

In 2021, Hainan welcomed 81 million tourists, just below the 83 million who visited in 2019 before the pandemic. But the new outbreak likely will keep Hainan from matching that figure this year.

“People are devastated,” says George. “This is just going to absolutely decimate the economy here.”

To leave, George and other stranded tourists must take five government-administered PCR tests over the next seven days. He says that he is still free to move around outside his hotel. Most establishments are closed, but there is one grocery store where he can buy food. He can walk on a promenade next to the beach, but the beach is now closed due to the outbreak.

Flights may resume when he finishes his weeklong testing regimen, but he’s not overly optimistic. He says he feels more trapped now than he did in Shanghai amid the city’s two-month lockdown earlier this year.

“At least Shanghai, it wasn’t an island,” says George. “There was still an element of flexibility when it came to movement. Now we’re at the mercy of airlines being able to get in.”