The type and frequency of animals coming down with COVID is trying to tell us something about the future of the pandemic. Scientists are on the case 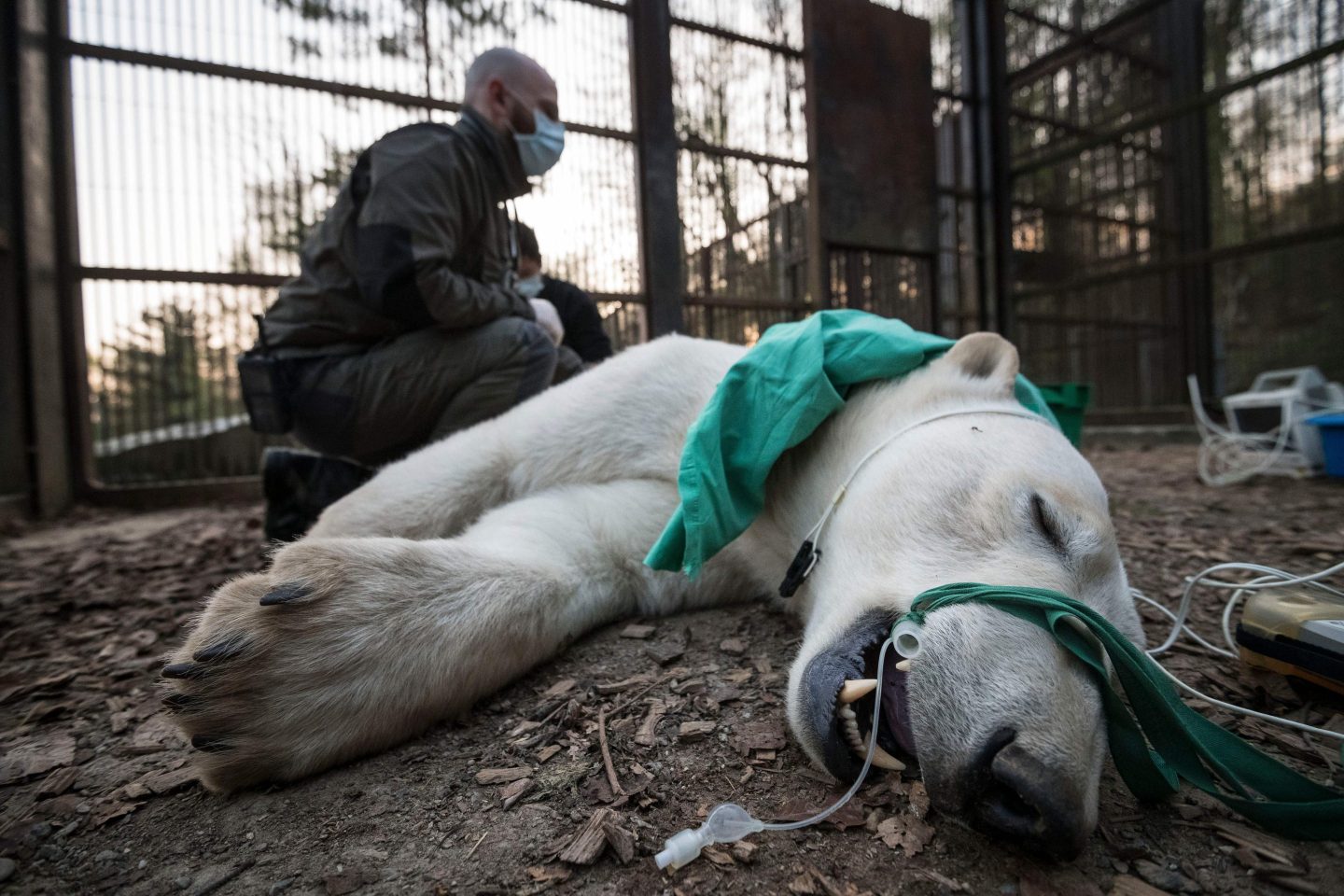 This polar bear doesn't have COVID, but thousands of animals have been diagnosed over the course of the pandemic.
SEBASTIEN BOZON—AFP/Getty Images

The story was referencing 4-year-old Malayan tiger, Nadia, who contracted COVID early in the pandemic, along with six other tigers at the Bronx Zoo—likely after being cared for by a presymptomatic zoo worker.

It was the first in what would become a steady stream of stories about animals who, like most of us, came down with COVID. Among the menagerie of animals who have, according to the U.S. Centers for Disease Control and Prevention:

COVID is infamously no exception to the “zoonotic” diseases that animals have transferred to humans, or vice versa. It’s thought to have spilled over from a bat, pangolin, or racoon dog to humans, perhaps via an intermediary like a pet (although a controversial “lab leak” hypothesis has not quite been completely debunked).

Similar to COVID, the H1N1 “swine flu” pandemic of 2009 is thought to have been caused by North American and European pigs intermingling, mixing strains of the flu. West Nile Virus, which originated in arthropods and is transmitted by mosquitoes, established itself in New York City in 1999 and has since become endemic in the U.S. And monkeypox, a smallpox-related virus once endemic to Africa but now sweeping the globe, was discovered in monkeys, though it’s thought to have originated in rodents.

Animals most likely launched the COVID-19 pandemic, as they have so many others—but their role in it didn’t disappear afterward. The pathogen now circulates in both populations, crossing over and spilling back, even if such occurrences are relatively infrequent. And like humans, animals continue to shape the pandemic, as new variants and subvariants mutate in hosts with skin, fur, and feathers before attempting to launch into the broader population.

Scientists are watching the animal kingdom for signs of what’s coming next.

A host is a host

Scientists have recently begun tracking the spread of COVID in animals on publicly available data dashboards. One, launched late last month by the Wildlife Conservation Society and Australian researchers at the University of Veterinary Medicine Vienna, has so far documented 704 diagnoses of COVID-19 in animals worldwide, in 39 countries and 27 species.

The risk of contracting COVID from animals is small, says Dr. Mary Montgomery, a clinician educator in the Division of Infectious Disease at Brigham and Women’s Hospital, a Harvard-affiliated facility in Boston.

But it’s real. COVID entered humans from animals—perhaps in multiple patients from multiple animal encounters in late 2019, according to a recent study—and it can reenter animals via humans in a process scientists call “zoonotic transmission.”

Just as COVID can mutate in humans, it can mutate in animals. Thus, an animal with COVID could spawn a new variant or subvariant and transmit it back to humans.

In a worst-case scenario, that new variant would be even more transmissible than the currently dominant Omicron subvariant BA.5 and even more immune-evasive—perhaps even able to outsmart antivirals like Paxlovid and monoclonal antibody treatments given in hospitals and outpatient settings.

The most likely culprit in such a scenario may be a bird, due to their migratory nature.

“Birds can migrate and rapidly disseminate novel pathogens,” Montgomery says. “And there are definitely many cases in literature of other coronaviruses affecting birds.”

Among researchers keeping their eyes on the avian population: Dr. Raj Rajnarayanan, assistant dean of research and associate professor at the New York Institute of Technology campus in Jonesboro, Ark. He created and maintains a number of COVID-related data dashboards, including one on of COVID in animals, populated with data from GISAID, an international research organization that tracks changes in COVID and the flu virus.

While the majority of globally identified animal cases have been in mink, deer, and pets like cats and dogs, Rajnarayanan recently noted that COVID has already crossed over into the avian population. The first two reported cases were recently identified in swans in China.

Omicron seems more likely to infect chicken and turkeys than the Delta variant, he says, adding that the avian crossover could eventually have “big implications” like new mutations, extensive spread of the virus, and impacts on food supply.

“Everyone wants to concentrate on mammalian species,” he says. “Now birds enter the picture. We want to monitor this much more closely.”

Rajnarayanan would like to see the U.S. Department of Agriculture facilitate more frequent testing of farm animals. He also thinks the agency should provide protective gear for farmers to reduce the likelihood of transmission from farmers to farm animals, and vice versa.

“We’re almost in our third year—we don’t want to keep this thing going on forever,” he says.

Medical and veterinary professionals must partner

As climate change continues, forcing animals and humans into contact more regularly, spillover and spillback are bound to occur—be it COVID, avian flu, or a pathogen not yet known to man—perhaps the next pandemic.

Montgomery advocates for the concept of “One Health,” which emphasizes that the health of people, animals, plants, and their shared environment are inexorably intertwined.

Veterinarians and doctors used to train together before the advent of the automobile, which resulted in doctors moving to big cities with hospitals and veterinarians moving to rural areas, where they were needed to care for farm animals, she says. Harvard used to be home to a veterinary school, in addition to its medical school, and students trained together.

Such transdisciplinary collaboration is needed again if we’re to finally get ahead of this pandemic—and prevent the next.

“We have to have the resources not just to think about human health, but to make sure we’re thinking about animal health,” she says, adding that humans often fail to become concerned about diseases in animals—until they enter humans.

“Sometimes we don’t think of prevention or early mitigation or containment. We only react once something has entered the human population. Awareness is key here.”