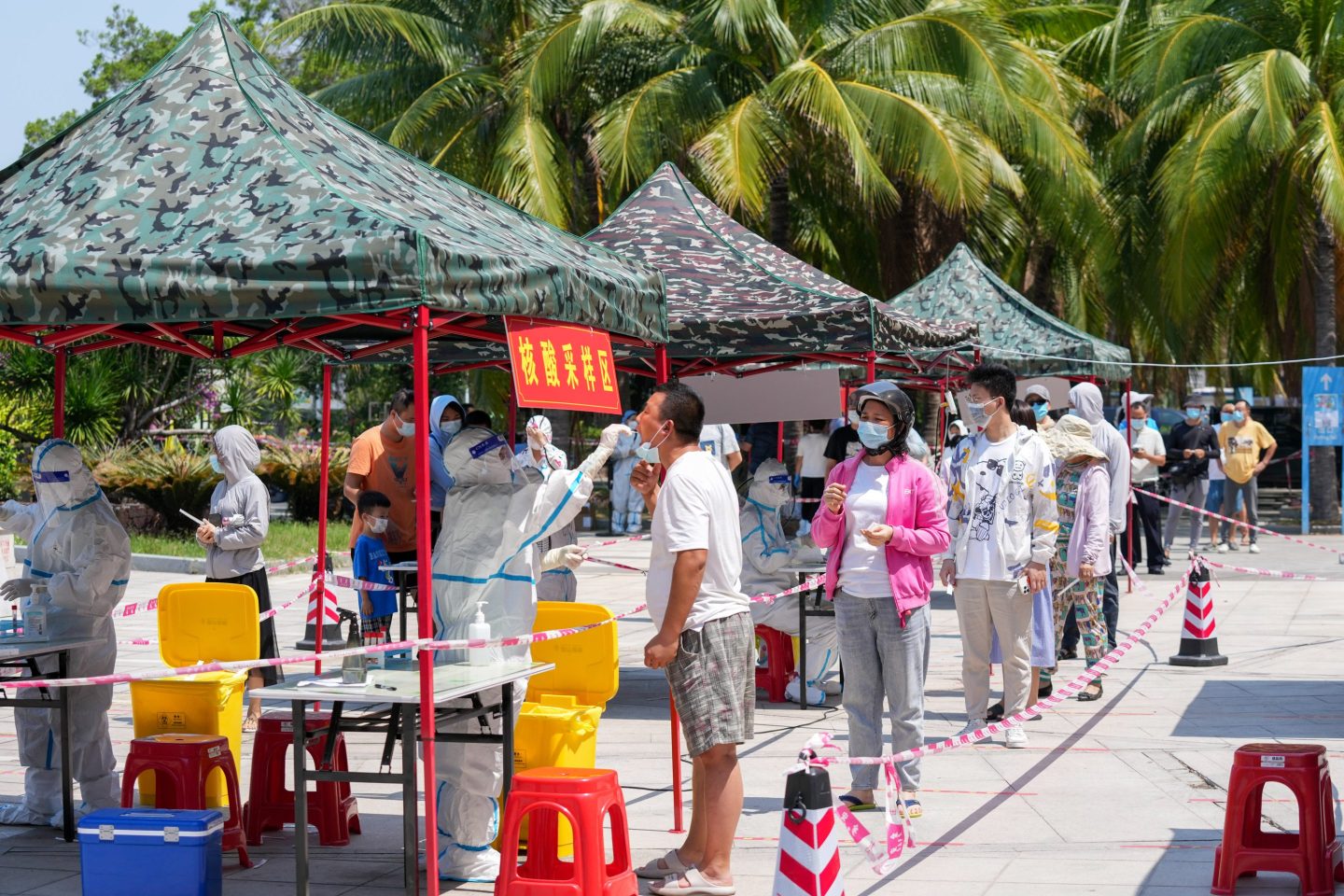 People line up for nucleic acid testing at a temporary COVID-19 testing site on April 8, 2022, in Sanya, Hainan Province of China.
Wu Wei--VCG

Every year, tens of millions of Chinese urban dwellers escape to the tropical island of Hainan for its white-sand beaches, year-round warm weather, and all-inclusive resorts. But the beach getaway has turned into a literal tourist trap, with Chinese authorities stranding thousands of travelers in the tropical paradise due to a small COVID outbreak.

On Friday, China’s Hainan island reported 127 new confirmed COVID-19 cases, including 48 in the capital Sanya. That number of cases may seem minuscule for an island of 9.2 million people, but Chinese authorities still adhere to a COVID-zero policy that does not tolerate any spread of the virus. China deploys harsh lockdowns, mass testing measures, and strict border controls to ensure that it stamps out all COVID cases, even as nearly every other country on earth has given up on fully eliminating the virus.

Local authorities said the Hainan outbreak started at a fishing port, and likely emerged from locals who traded fish with fishermen from outside China. Authorities also said that the Omicron subvariant BA.5.1.3, an offshoot of the BA.5 strain that is dominant in the U.S., is driving the current wave of infections.

Chinese tourists have few alternatives besides Hainan for beach getaways. They have stopped traveling overseas due to pandemic restrictions that still require anyone entering China to undergo a seven-day hotel quarantine, at minimum. Countries around the world have lost out on the booming business of Chinese travelers, but domestic operators have not been able to fully capitalize on China’s travel demand. Amid sporadic COVID lockdowns, China’s domestic tourism industry generated roughly $500 billion last year, down 40% from pre-pandemic highs.

Since Wednesday, people caught in regions of Hainan that the government has designated “high-risk zones” for COVID have been unable to leave their homes other than to buy groceries and other essential goods, according to local authorities. The local government also shut down all public transport including buses and trains in the locked-down areas. In non-high-risk zones, authorities still closed all nonessential shops and restaurants and said that people would need to present a negative PCR test to access public areas like parks or their offices.

One expat visitor posted on Twitter that after he went for a walk on the beach, his hotel blocked him from re-entering because the health code on his phone had changed from green to yellow. In China, everyone uses a mobile phone health code app that evaluates their risk of carrying COVID on a green, yellow, and red basis. The expat wrote that authorities changed his code because they mistakenly thought he had visited a high-risk zone in Sanya. But changing his code back to green was impossible due to the city’s strict COVID rules, and he claimed that the hotel would not let him back in until he took two PCR tests over a 48-hour period.

The policy appears to be the same for stranded tourists hoping to escape the island. The local government says that anyone trying to leave Hainan needs to present two negative PCR tests to authorities. Some travelers reported on Weibo, China’s version of Twitter, that even after they left Hainan, authorities in their home provinces said they would have to self-isolate for seven days.

The lockdown in Hainan is not the first COVID outbreak to strand tourists in China. Last month, 2,000 travelers got stuck in a small resort town called Beihai in southern China for days amid a local flare-up of COVID infections. As of late July, 260 million people in China were living under partial or full COVID lockdowns, according to investment bank Nomura.