Singapore, Tokyo, and Shanghai all dream of replacing Hong Kong as Asia’s top financial center. Here’s how they compare 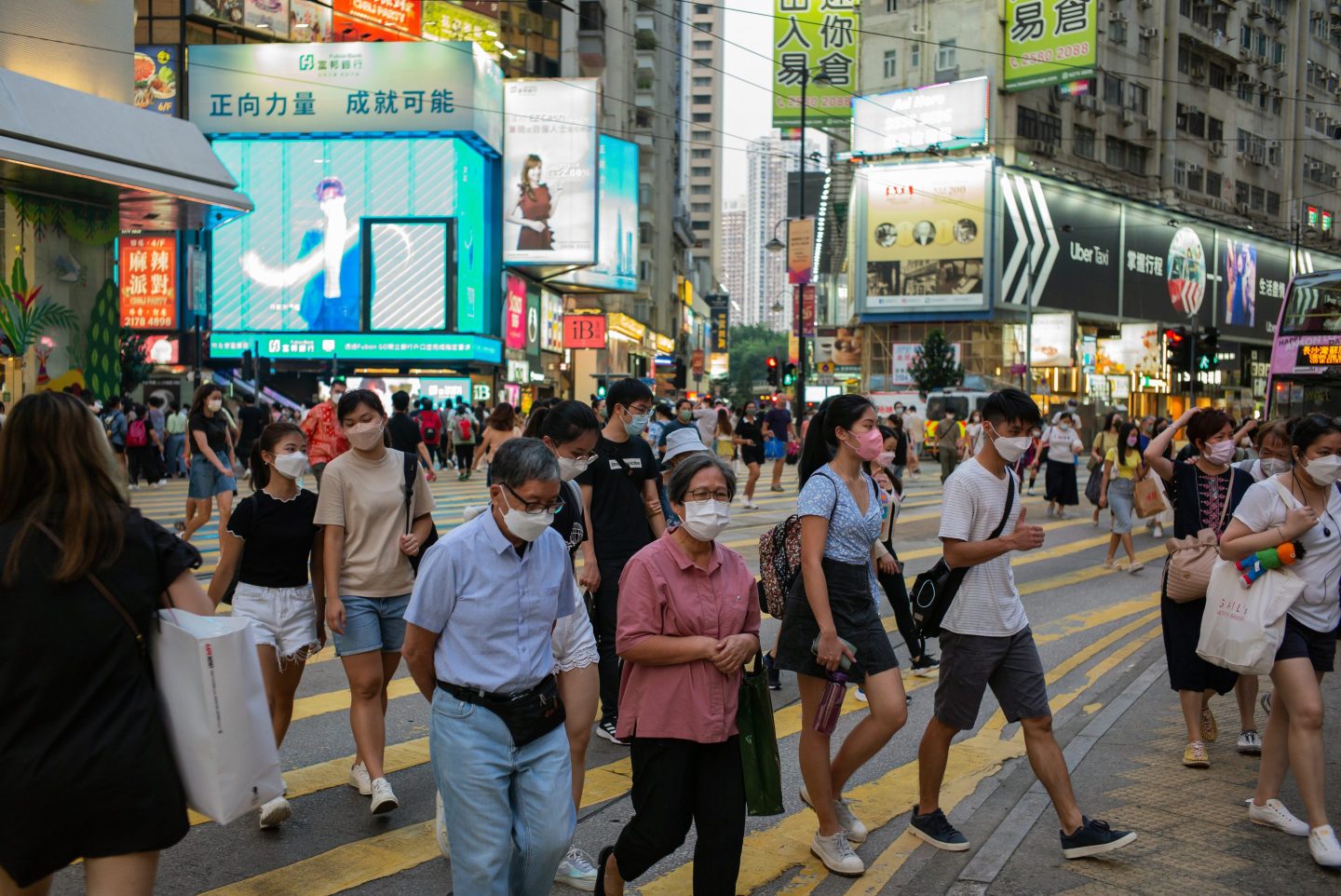 But dethroning Hong Kong as Asia’s financial capital won’t be easy. None of the three cities most frequently mentioned as potential alternatives—Singapore, Tokyo, and Shanghai—can match Hong Kong’s unique combination of cultural and commercial attributes. All, for different reasons, face daunting challenges in attracting global talent.

Read more: China’s tech crackdown, a national security law, and an expat exodus have pummeled Hong Kong. Can this CEO save the city?

Singapore’s port, with 1,000 berths and 300 cranes, is No. 2 in the world by volume.
Bernd von Jutrczenka—Picture Alliance/Getty Images

Consider Singapore, often cited as the most likely refuge for the thousands of expat executives who have fled Hong Kong over the past two years. Like Hong Kong, Singapore is a former British colony with a British commercial code, and a world-class airport with easy connections to other Asian cities. English and Chinese are widely spoken. International school standards are high, taxes are low. Southeast Asia has become an increasingly attractive business destination for Western companies. And, unlike Hong Kong, Singapore in April lifted the border restrictions it introduced early in the COVID pandemic to allow entry to all vaccinated travelers.

And yet, as Bloomberg recently reported, the influx of bankers into Singapore from Hong Kong has turned out to be “more of a trickle than a flood.” Global companies seeking to shift staff to Singapore say they’ve encountered unexpected resistance from immigration authorities in the form of stricter visa requirements, new hiring restrictions, and other bureaucratic obstacles. Transferees who did win visas say they’re scrambling to find housing, with rental prices for private properties leased by expats surging as much as 40% over the past year. New arrivals to Singapore are often stunned to discover that, if they want to purchase a car in the city, they must first bid on a state-issued “certificate of entitlement” that this month cost a record-high $82,000. That’s on top of the price of the car itself. In Singapore, midrange cars can cost five times as much as in the U.S.; in Singapore a Toyota Camry retails for $132,000, compared with $28,000 in the States.

For bankers and brokers, Singapore’s biggest drawback is its dinky stock market. The Singapore exchange is home to fewer than 700 companies with a total market capitalization of less than $700 billion; Hong Kong’s stock exchange has more than 2,500 companies and a market cap of over $5 trillion.

–Easing COVID travel restrictions
–First-rate infrastructure, including the world’s top-ranked airport
–The new hub of choice for events like the Formula 1 Grand Prix
–An efficient launching pad for doing business in Southeast Asia
–No tax on capital gains
–English is widely spoken

–Far from China; the nearest Chinese city is five hours away by plane
–A tiny stock exchange, with fewer than 700 listed companies and a market capitalization of less than $700 billion
–An immigration system in which employment visas for foreign staff are hard to come by

Tokyo was the region’s dominant financial center until the implosion of Japan’s speculative asset bubble in the 1990s. Both central and Tokyo metropolitan government leaders have said they want Tokyo to reclaim its old position as Asia’s finance capital. It’s not an unreasonable goal. Tokyo, with 38 million people, is Asia’s most populous city, the capital of the world’s third-largest economy, and home to 47 Fortune Global 500 companies. Tokyo boasts the world’s most punctual network of trains and subways. Once sky-high rents and property prices have declined steadily over the past several decades and are now significantly lower than those in Hong Kong. And the yen’s 20% decline against the U.S. dollar this year is a potential boon for expat bankers paid in greenbacks.

But those considerable advantages are offset by the fact that Tokyo has few foreign residents, and few Japanese speak foreign languages. The Tokyo Stock Exchange, with 2,200 companies and a market cap of more than $5 trillion, is comparable to Hong Kong’s in size, but includes only four non-Japanese companies. Japan’s long economic stagnation has made it an unattractive destination for global investors, and the Tokyo exchange has little appeal for investors seeking to bet on continued growth in China.

But for global bankers, brokers, and asset managers, the real dealbreaker is taxes. Japan’s top personal income tax rate is 55%. Capital gains, which are untaxed in Hong Kong and Singapore, are treated as income in Japan.

–Japan is the world’s third-largest economy and home to 47 Fortune Global 500 companies
–High-caliber infrastructure, with the world’s most punctual network of trains and subways
–Once sky-high rents and property values have declined and, by Hong Kong standards, seem almost affordable
–A weak currency that has plunged 20% against the dollar this year, a boon for expat bankers paid in USD

Official vows that Shanghai would eventually eclipse Hong Kong as Asia’s financial capital go back decades but gained momentum after the global financial crisis. In 2009, Zhou Xiaochuan, then governor of China’s central bank, told a prominent Chinese financial forum that China “needs an international financial center” to match its rising influence in global finance and that Shanghai was the best candidate. The Shanghai skyline, which sprouted skyscrapers throughout the 1990s and 2000s, now looks the part. The Shanghai Stock Exchange, with a market cap of $7 trillion, is the world’s third-largest and hosts 85 Fortune Global 500 firms.

But Shanghai, like Tokyo, functions almost exclusively as a marketplace for domestic companies and investors. For financiers, the disadvantages to setting up shop in Shanghai are numerous and significant. At the top of the list is China’s commitment to a “COVID-zero” approach to combating the coronavirus, leaving residents at risk of extended citywide lockdowns in the event of a minor outbreak. China’s borders remain effectively closed to non-Chinese travelers. It doesn’t help that China has a digital firewall to block internet access to overseas websites; the wall can be hurdled using a VPN, but connections are slow and unreliable.

Top tax rates on China’s mainland are nearly as high as those in Japan. China’s legal system is opaque and unpredictable. Mainland stock exchanges, though huge, are dominated by unsophisticated retail investors and often behave more like casinos than markets. Another significant drawback: China’s strict capital controls mean that foreign investors who profit on the Shanghai exchange can’t bring their money home.

–Its stock exchange, with total market cap of about $7 trillion, is the world’s third-largest and features 85 Global 500 companies
–A government pledge to make the city one of the world’s leading financial hubs

–Chinese exchanges, dominated by retail investors who trade heavily on rumor, are highly volatile
–A COVID-zero policy that has shut out foreign travelers and subjected residents to mass lockdowns
–Strict capital controls; profits earned in China have to stay there
–Personal income tax rates of up to 45%
–The Great Firewall, which restricts internet access to websites outside China

A version of this article appears in the August/September 2022 issue of Fortune with the headline, “Which city will be the next Hong Kong?”