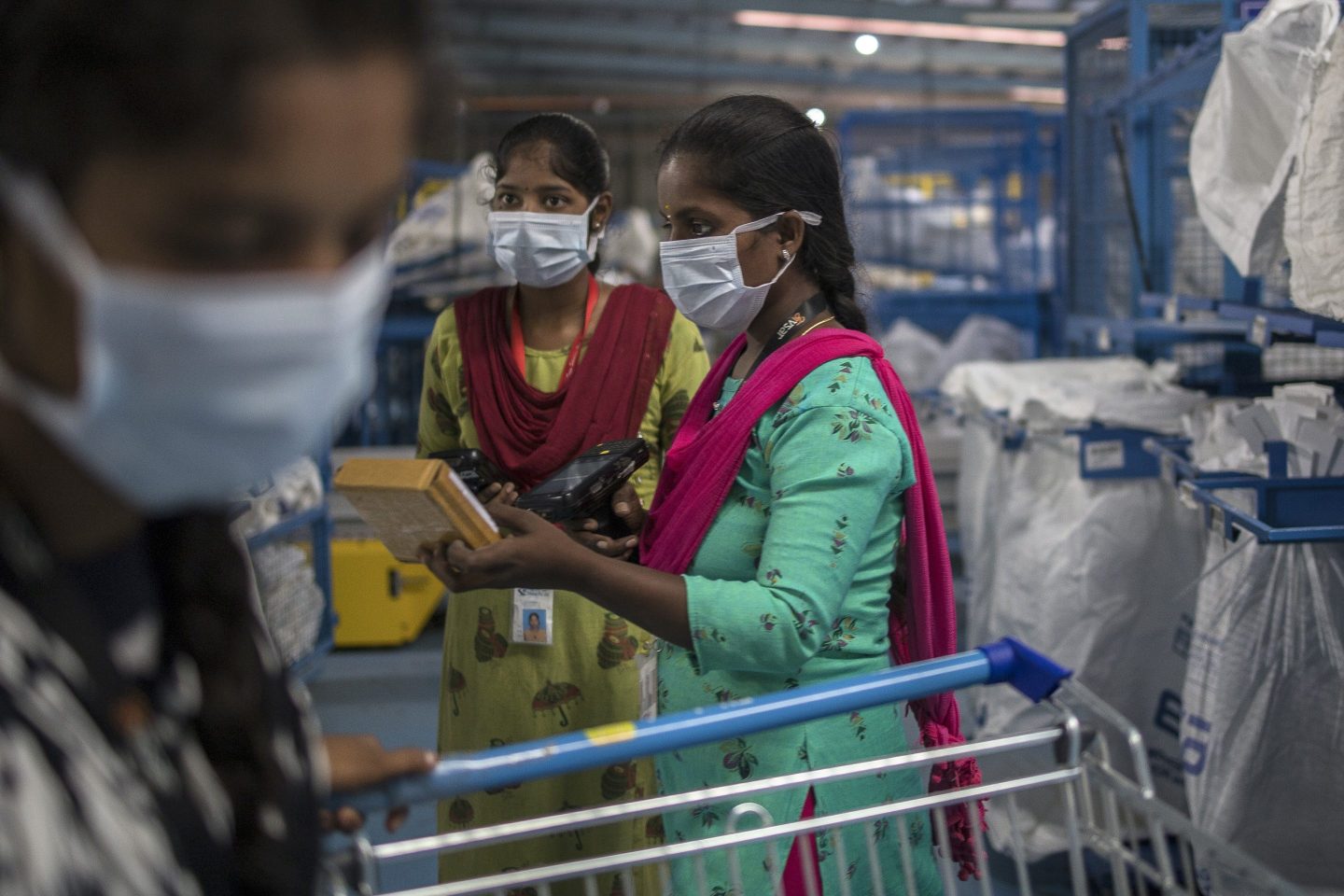 A worker wearing a protective mask scans a package at a warehouse owned by Walmart-backed e-commerce giant Flipkart in the outskirts of Chennai, India.
Anindito Mukherjee - Bloomberg - Getty Images

This month, retail giants and government regulators around the world will be watching closely as India rolls out the Open Network for Digital Commerce (ONDC) in 100 major cities.

ONDC is a government-backed initiative that was conceived by non-profit think tanks. The project, championed by Indian billionaire and Infosys founder Nandan Nilekani, aims to create a level playing field in online commerce by putting tens of millions of kiranas (Indian family businesses) on an even footing with online giants such as Amazon, Google, and India’s Flipkart(a Walmart subsidiary). According to Reuters, Amazon and Flipkart currently control more than 60% of the Indian e-commerce market.

ONDC caps referral commissions for platforms that send shoppers to a seller at three percent–a far cry from the roughly 30% cut that third-party sellers lose on the existing major e-commerce platforms.

Shoppers will find themselves in an unprecedented situation: Amazon will be bidding for business on the Flipkart application and vice versa. Searches on Amazon.com may result in eBay listings, illustrating how fluid ONDC may make online commerce.

“We have a chance to start over and remake the digital world to be more fair and transparent for all participants. With ONDC, we hope not only to create a level playing field for India and all the businesses operating there but also provide a glimpse for the whole world of how open commerce can drive positive non-zero-sum outcomes for business and society,” Nilekani said in an email exchange.

Even mid-sized firms are clamoring for ONDC. The program effectively creates an open order book for purchase requests that any store on the network can respond to.

ONDC envisions itself as creating a digital foundation for commerce that incorporates inventory, logistics, dispute resolution, and more. After a successful launch in five Indian cities, Delhi, Bengaluru, Bhopal, Shillong, and Coimbatore a nationwide launch is in the plans according to Union Minister Piyush Goyal.

If it works as expected, ONDC could fundamentally change the game for e-commerce, herald a future of open competition with less dominance by vertically integrated platforms, and show U.S. regulators ways to take on their own monopolies.

ONDC is not an application, an intermediary, or a specific piece of software. Rather, ONDC is a set of specifications designed to foster open interchange and connections between shoppers, technology platforms, and retailers.

At its core, ONDC is an open network underpinned by a set of open standards similar to India’s Universal Payments Interface. In fact, the underlying open standards of ONDC are an adapted version of the Beckn Protocol, a global open source standard from India that can be used even beyond retail commerce for sectors such as mobility and health, the Beckn Foundation’s CEO and cofounder Sujith Nair, in an email exchange.

Open standards underpin open networks such as the internet. A core set of technology standards enables interconnection between numerous types of systems. Effective open networks and standards foster competition and eliminate friction and barriers to entry.

According to Nilekani, ONDC aims to democratize digital commerce, replacing a platform-centric model (where the buyer and seller must use the same platform or application in order to transact) with an open network that allows–and even requires–cross-platform and cross-application interaction and commerce.  ONDC provides open specifications and open network protocols that all players in a market can use to connect and share information.

Currently, e-commerce in the United States, Europe, and India makes platforms the arbiters and intermediaries. To compare prices or offers, an online shopper must hop from one platform to the other, creating difficulties in comparing similar products by vendor prices, shipping costs, taxes, and more.

While shopping search engines such as Google Shopping do offer the ability to compare prices among online stores, they mainly confine their searches to larger e-commerce companies with the budgets and technical know-how to list products and manage complex data feeds from inventory systems.

Because ONDC functions as a set of standards, it will allow consumers to pick one of many platforms for shopping.  Each platform will receive the same product, pricing, and availability information, based on the same set of standards. Your corner kirana owner will need to manage only one tool in order to provide information to many platforms. The thinking is that this will smoothly bring kiranas into the digital world without forcing shopkeepers to become digital mavens.

ONDC may also unlock the ultimate advantage for kirana businesses: proximity. As Amazon races toward same-day delivery and venture capitalists continue to bet big on short-window-delivery startups that promise to deliver in an hour or less after an order’s placement, India’s local merchants already have “less-than-an-hour” commerce solved by virtue of their location down the street from a buyer.

India is a natural laboratory in which to test out the concept. It has one of the highest digital finance participation rates in the world at over 80%, according to Nilekani. The Indian Government is pursuing an aggressive digitization policy. ONDC aims to have 25% of all internal Indian commerce occur online within two years. That’s triple the current online penetration rate of eight percent of internal commerce.

ONDC may provide a smooth entry for kiranas, but ultimately all players will benefit. Homegrown e-commerce competitors to giants Flipkart and Amazon, such as SnapDeal, who wish to compete on user experience and price on a level playing field, are signing up for ONDC. Google too has indicated interest. Indian technology companies that provide e-commerce services and capabilities to medium-sized businesses see ONDC as a potential boon to their own operations.

There are challenges and risks for ONDC. Even if it succeeds, its effect may not match its intent. Bringing the tens of millions of existing kiranas onto the platform will require a massive, well-funded adoption campaign. Amazon and Flipkart will continue to benefit from economies of scale that enable them to negotiate lower prices. Any move to restrict commerce that results in higher prices could spark consumer backlash–and the large platforms may end up being the ones that benefit the most from ONDC.

In the case of India’s Unified Payment Interface (UPI), which was designed to provide an open standard for payments, Google Pay and Walmart’s PhonePe have grabbed a dominant share of transactions. The government is looking at mechanisms by which to generate more competition, but this will be challenging without directly restricting user behaviors.

However, the combination of ONDC and UPI could reduce barriers to entry. By open-sourcing India’s commercial underpinning, the two could set the stage for more competition by allowing new entrants to challenge incumbents with greater ease.

For retailers and governments around the world, ONDC provides a glimpse of what open retail might look like in practice. Ultimately, everyone–shoppers, merchants, and even giant platforms–would benefit from turbocharged e-commerce adoption and the creation of a larger global economic pie.

Alex Salkever, Ismail Amla, and Vivek Wadhwa are the co-authors of a book on building billion-dollar businesses, From Incremental to Exponential: How Large Companies Can See the Future and Rethink Innovation.