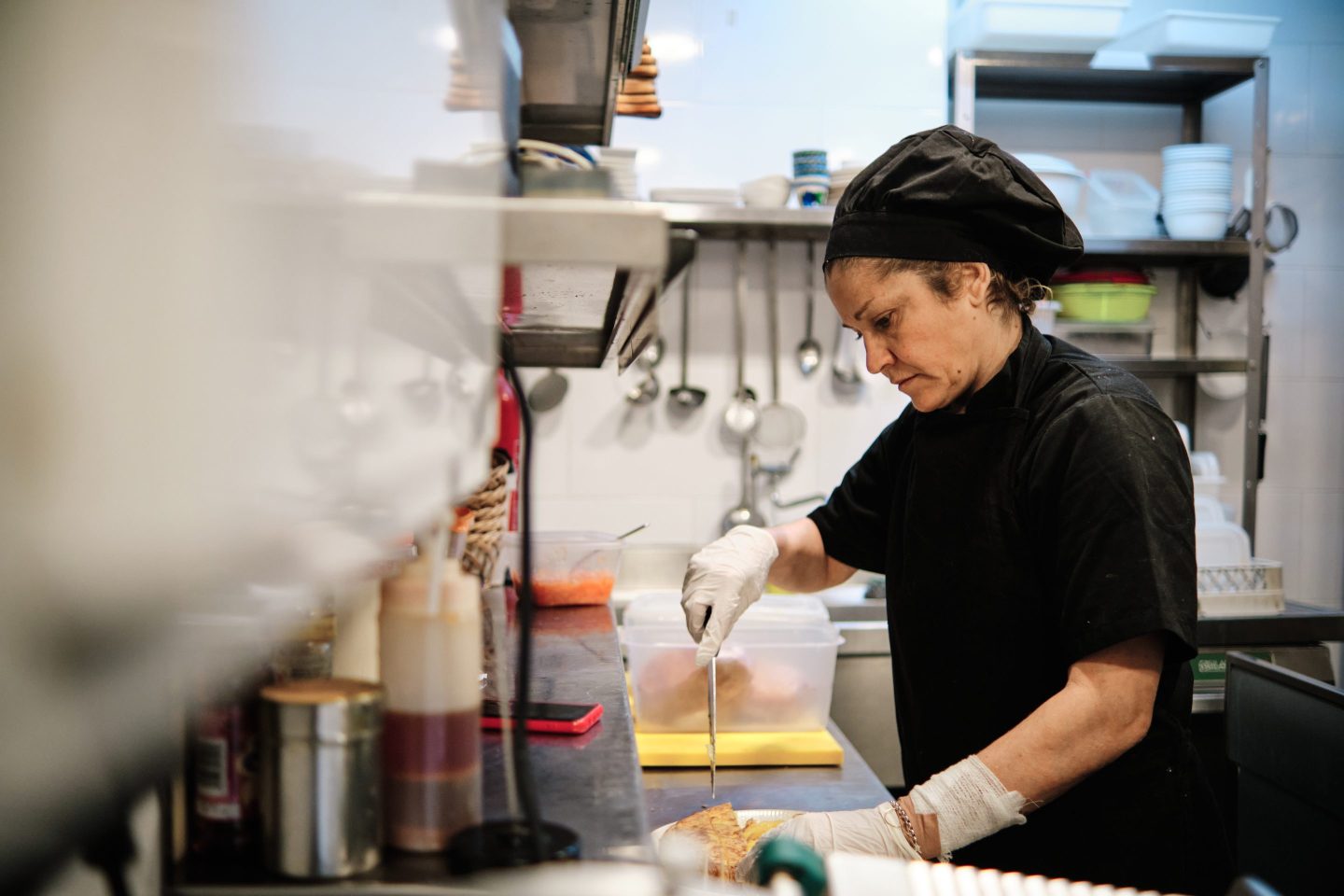 Like many of America’s hourly workers, the $12 per hour she earns working at McDonald’s in Raleigh, N.C. doesn’t stretch far enough. “It’s a struggle to keep your head above water. It’s stressful, too,” Blalock tells Fortune.

Blalock has spent nearly a decade at the fast-food chain working nearly every station, she says—except in maintenance or as a cashier. “Some of [the customers] can be nasty. That’s probably why I’ve kept my job so long because I don’t interact with them. I’d rather stay in the back where it’s a little bit safer.”

But despite her time at the chain, Blalock says she’s struggled to keep her finances on track amid rising prices, particularly now with sky-high inflation. To help keep her expenses low, Blalock relies on the free meal she gets during her McDonald’s shift and takes the bus to and from work.

Public transportation presents its own challenges. “The buses here comes when they want to,” Blalock says, adding that sometimes that means she’s late to work. While that wouldn’t be an issue for most salaried employees, even seconds can matter for hourly workers. “That’s pressure. You’ve got to get there within the grace period, or you’re going to hear some flak. That’s something that you don’t want to start your day out with,” she says.

“A lot of people are just stressed out right now and…just don’t know what to do,” Blalock says. “So you go to work and you try to make everything happen, because that’s your only paycheck.”

Living on the edge financially not only affects workers like Blalock, but employers too, according to the Financial Health of Workers in Low-Wage Jobs Report released Thursday by the Financial Health Network. About 21% of workers in low-wage jobs report that their high levels of financial stress negatively affects their productivity and job performance.

Currently, about 44% of the entire U.S. workforce, about 53 million Americans between the ages of 18 and 64, falls into the category of low-wage workers, according to the Financial Health Network’s report. The report categorizes low-income jobs as those that pay less than $17 per hour, or up to $35,360 in an annual salary.

Unsurprisingly, low-wage workers like Blalock are twice as likely as the average employee to identify as financially vulnerable—grappling with most or all aspects of their finances. Most low-wage workers routinely struggle to save, acquire adequate insurance coverage, and pay for essentials like food and rent. Only about 13% of workers in low-wage jobs say they are financially healthy.

“Workers in low-wage jobs are constantly under financial stress that takes a toll on many aspects of their lives,” Beth Brockland, vice president of workplace solutions at the Financial Health Network, said in a statement.

The burden of struggling to manage their money can extend to their work day. Low-wage workers spend an average of about 1.3 hours a week dealing with their finances at work, including activities like contacting creditors, as well as managing their bank accounts. That adds up to about 66 hours of lost productivity annually from just finance-related issues.

“Employers have a lot to gain by investing in the financial health of their workers, not only to improve workers’ well-being but to foster more engaged and productive employees,” Brockland said.

Higher pay is only part of the equation. Although it’s legal to pay workers just $7.25 in more than 20 states—the U.S. hasn’t raised the federal minimum wage in 13 years—only about 1.5% of all hourly workers make that little, according to a 2021 report from the Bureau of Labor Statistics.

Blalock has worked for McDonad’s in North Carolina for nearly 10 years. Most of that time, her pay was about $8 an hour. But over the last two years, she's received a series of raises that bumped her up to $12 per hour. (North Carolina’s hourly minimum wage is still $7.25.)

Yet while wages have increased overall for workers across the U.S. in recent months, benefits like health insurance and retirement plans are still scarce. Even a stable work schedule can be a huge help to hourly workers. As of fall 2021, nearly two-thirds of workers still get less than two weeks’ notice about their upcoming work schedule, according to the Shift Project. And yet research shows unpredictable work schedules can lead to income volatility that makes it harder to budget for rent, food, and utility payments.

A third of the low-wage workers surveyed by the Financial Health Network report their employer doesn’t offer any employer-sponsored retirement plan. Another 20% are unsure if their company offers retirement options.

Investing in the financial health of their workers could be a win-win for employers. Not only could it boost productivity and performance, but it also helps with retention. Workers who have these types of financial benefits are much more likely to report wanting to stay at their job for at least the next year, according to the survey.

But it could be have an even bigger impact on hourly workers, especially when it comes to access to health insurance. Blalock works 35 hours a week but she doesn't qualify for benefits like health insurance. “For McDonald’s, there are no benefits, period,” Blalock says.

McDonald's did not respond to Fortune's request for comment, but benefits and wages do vary depending on whether a location is owned by corporate or a franchisee.

When Blalock needed cataract surgery last year, she had to rely on a Medicaid program and a local medical charity to pay for the procedure. She postponed having the operation done for years because of the cost, and as result, she's now dealing with partial blindness.

“Sometimes you’ve just got to send up a prayer up and just pray about it. But it's still stressful,” Blalock says.

Although Blalock has considered trying to find a new job, as a member of Raise Up (the Southern branch of the Fight for $15), she’s reluctant to move on without seeing a $15 minimum wage come to McDonald’s. About 89% of McDonald's workers make less than $15 per hour, according to the Shift Project's April 2022 brief.

“If I can, I am going to stick with this until the end,” Blalock says. “It’s my passion right now.”

Yet the stress and toil of working a low-wage job does weigh heavily—even if she tries to push it down. “I'm a happy person, and I like fun and music. I enjoy people,” Blalock says. “So they see this of me [and think] this is the way it is all the time. Trust me, it’s not.”

“You have to put up a front for people sometimes to not cry in front of them.”