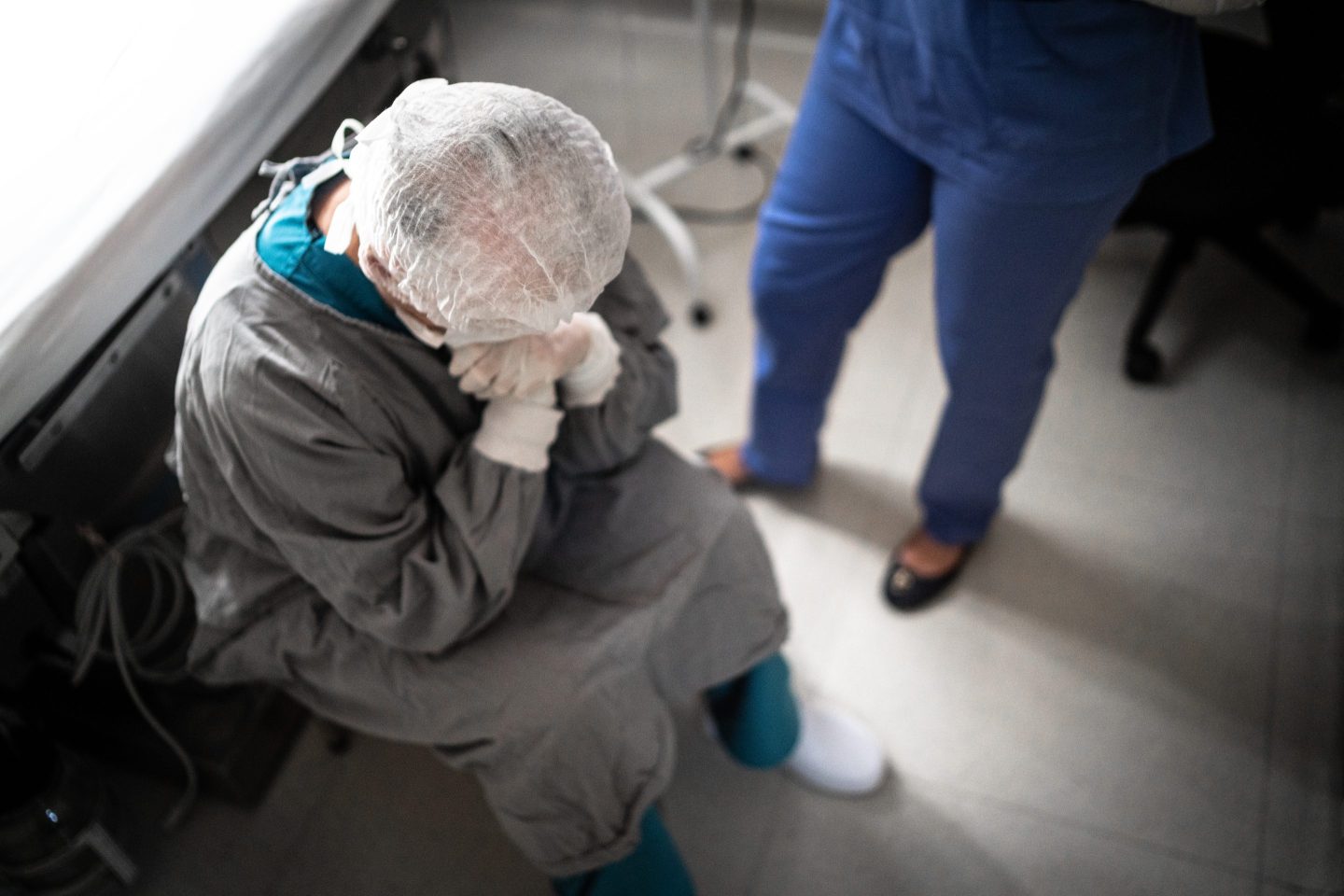 Nurses have been leaving the profession in large numbers, writes Carolyn Barber, and many "think the fear of being held criminally liable for medical mistakes will drive the total higher in 2022."
Courtesy of Getty Images

Far from the Nashville courtroom where nurse RaDonda Vaught was convicted of homicide for giving a patient the wrong drug, medical experts and talking heads have mostly asked the right questions. Will the case have a chilling effect on the nursing profession? Did software system issues at Vaught’s hospital contribute to the tragedy? Aren’t chronically low staffing levels priming the pump for future mistakes?

All are important, all worthy of examination. But the rush to answer these questions obscures a development, nurses say, that may radically alter the delivery of medical care in our country. It is a sea change hiding in plain sight.

Over the past two decades, health systems in the U.S. have moved steadily toward the “just culture” model of care. In a just culture, caregivers are held accountable for their mistakes, but without scapegoating. The larger emphasis is on identifying and improving the processes, procedures, and training and design flaws that led to the failures in the first place. Many have argued that in a profit-driven health industry, just culture is one of the few effective means of constantly forcing reevaluation and upward evolution in care.

The just culture approach, though, relies heavily on a free flow of information and transparency, with doctors and nurses encouraged to self-report their errors as part of the system-wide effort to improve. From the moment Vaught was criminally charged for the mistakes that killed 75-year-old Charlene Murphey, that model has been fraying at the edges.

In interview after interview, nurses told me they believe their colleagues will be much less likely to self-report errors, or even near misses. “People will die because of this,” says Janie Harvey Garner, founder of Show Me Your Stethoscope, an online nurse advocacy group that helped raise money for Vaught’s legal fees. Nurses also say they’ll think twice about employing the sort of routine shortcuts and workarounds that can be necessary in hospital settings to expedite care to patients, particularly those in critical settings.

“We will not report errors for fear of going to jail,” Leslie Silket said bluntly. Silket, a registered nurse in Northern California with 22 years of experience in major hospitals and clinic settings, told me the case is almost certain to drive more of her peers out of the profession, adding, “This is going to drastically impact the future of nurses and add to the shortage.”

“Every health care system I have worked in promotes a just culture, where there is some mechanism to report errors without fear of retribution,” said Gabe Wardi, a critical care specialist with the University of California, San Diego. “But since this case became publicized, I’ve noticed that a sizeable percentage of nurses have changed how they practice. Patient care will suffer at the expense of self-preservation, and after this case I don’t blame the nurses for protecting themselves.”

A cascade of mistakes

Promoting a just culture is not the same as excusing mistakes. RaDonda Vaught made several, experts say. Unable to find the prescribed sedative Versed in the Vanderbilt University Medical Center’s automated medication dispensing cabinet on Dec. 26, 2017, Vaught overrode the system. That was a fairly common practice at the time, her attorney said, because of problems in the medical center’s software system, which impeded communication between the medication cabinets, electronic health record and pharmacy. In subsequently typing in the letters “VE” and selecting the first drug that came up, though, she erroneously selected vecuronium, a powerful paralytic. (Versed is a brand name; Vaught should have been looking for the sedative by its generic name, midazolam.)

Vaught also failed to check the label on the medication, did not heed a bottle cap warning that described the medicine inside as a paralyzing agent, and failed to recognize that Versed is a tablet, but vecuronium a powder. Vanderbilt did not have a bar-code scanner in place in the radiology suite to confirm the patient’s drug order, another potential safeguard against mistake.

After administering the paralytic to Murphey, Vaught—who was working as a “help-all” on that shift, helping with nursing needs across the neurologic intensive care unit as they arose, while also mentoring a student—did not remain with the patient to check for an adverse reaction. Murphey suffocated and was pronounced dead the following day.

“It’s a classic wrong-drug error,” said Bruce Lambert, a patient safety expert and director of the Center for Communication and Health at Northwestern University. “It implicates all sorts of process issues about automated dispensing cabinets, about alerts, about overrides, about safe practices for paralytics, moderate sedation and monitoring, and so on. Those are the main facts.”

Vaught self-reported her mistakes. She took responsibility immediately, and in every interview thereafter. At a Tennessee Board of Nursing hearing last year she said, ”I know the reason this patient is no longer here is because of me. There won’t ever be a day that goes by that I don’t think about what I did.” The board did not recommend that she lose her license or be suspended. But about a year later, an anonymous tip led to state and federal investigation, the filing of criminal charges, and ultimately Vaught’s conviction in March of criminally negligent homicide and abuse of an impaired adult. Vaught was convicted despite agreement between prosecutors and defense attorneys that the nurse’s mistakes were purely unintentional.

This criminalization of medical errors, though not unprecedented, is incredibly rare. But this April in North Carolina, a grand jury reacted to the 2019 death of a Black jail inmate not by indicting any of the five detention officers who held him down in his cell while he repeatedly exclaimed, “I can’t breathe,” but by indicting the on-call nurse, an employee of a private contractor.

Medical institutions assiduously avoid court cases. Vanderbilt fired Vaught less than a month after Murphey’s death, then settled with Murphey’s family out of court, a deal that forbid the family members from speaking publicly about the agreement or the medication error. The center also did not report that medication error to state or federal officials, as required by law.

The medical center’s CEO has admitted that Murphey’s death was not reported to state regulators, and that the hospital’s response was “too limited.” The hospital has also filed a “plan of correction” with the federal Centers for Medicare and Medicaid Services in order to avoid losing Medicare reimbursement payments. But Vanderbilt has not been penalized for its failures, nor for several of the systemic issues that many argue contributed to the tragic sequence of events. “It’s a classic throwing an individual under the bus to avoid institutional responsibility,” says Lambert. (Reached by Fortune for this piece, Vanderbilt medical officials declined comment.)

Vaught went on trial facing a potential eight years in prison. That she ultimately was sentenced on May 13 to three years’ probation and judicial diversion does nothing, nurses say, to lessen the fact that in the end, she stood alone.

“What do we say? Do we say, ‘Nurses, don’t tell the truth anymore’?” says Garner, the advocacy group founder. “Just like everyone else, nurses have constitutional rights. We have a right not to self-incriminate—which is exactly what RaDonda did, because she was an honest nurse.”

The nursing workforce in the U.S. shrank by 100,000 positions last year, according to a recent study published in Health Affairs. The exodus was driven largely by nurses under age 35 who fled hospital-based jobs. According to the National Council of State Boards of Nursing, there are more than 4.3 million RNs with active licenses in the country, and some 5.1 million RN licenses issued overall. Yet only about 3 million are currently employed as RNs, 1.7 million of them at hospitals.

Nurses, that is, are staying away from their own profession. The ones with whom I spoke believe that chronic short-staffing by medical behemoths, along with COVID fatigue and worry, factor significantly into that issue—but they also think the fear of being held criminally liable for medical mistakes will drive the total higher in 2022. “We have all these checks and balances, but ultimately the end user is always the one who’s punished, and we’re scared,” says Shannon Cotton, a medical intensive care unit nurse in San Diego. Or as RN Suzanne Martin put it, “A precedent has been set, and the consequence is prison.”

The history of medicine is filled with great achievement and sorrowful failure. Mistakes happen. A study from Johns Hopkins University a few years ago estimated that more than 250,000 Americans die each year because of medical errors, and while other researchers have questioned the precise number, no one doubts that people die by mistake while under care.

What Vaught’s charges and trial highlight, to nurses, is the profoundly one-sided nature of that unhappy truth. Medical institutions and health systems roll on, but individuals can be ruined. If that is the case, then nurses will act to protect themselves from losing everything, even as it runs counter to so much of what they’ve been trained to do: anything to help a patient.

“We have been told time and time again that reporting mistakes is not to be punitive, because we operate in a ‘just culture’ framework,” said Anthony Cosenza, an RN in Pennsylvania. “This case really challenged that idea, and I am not sure many of us trust that to be true any longer.” Under no scenario does that reality play out to the good of patients or the practice of medicine in America.

Carolyn Barber, M.D. has been an emergency department physician for 25 years. Author of the book Runaway Medicine: What You Don’t Know May Kill You, she has written extensively about COVID-19 for national publications, including Fortune. Barber is co-founder of the California-based homeless work program Wheels of Change.