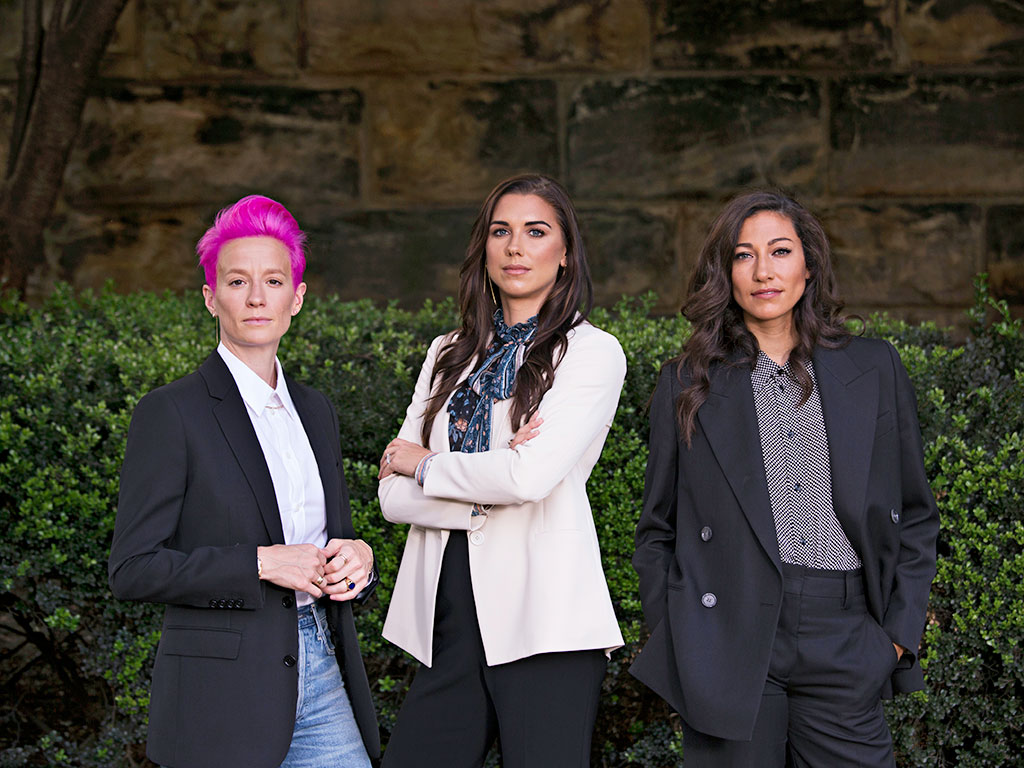 It was a hot July night in Lyon, France, and the U.S. women’s national soccer team had just defeated the Netherlands to win their second World Cup in a row. As the team waited on the field to accept their trophy, a chant erupted in the stands. In the din of the stadium, teammates Christen Press and Alex Morgan recall, the champs couldn’t make out the words. It wasn’t until the players rode their victory float through New York City a few days later that they heard the same chant and understood what the crowds were yelling: “Equal pay! Equal pay!” “I actually cried,” Press, who plays striker, tells Fortune. “I was so taken aback.”

The chants weren’t the only thing that had changed since the last time the team earned a ticker-tape reception, after the 2015 cup. Back then, the team had not yet sued their employer, the U.S. Soccer Federation, for allegedly violating equal pay and civil rights laws. (They filed a complaint with the Equal Employment Opportunity Commission in 2016 and filed suit in a California court this March.) The cultural context had also shifted profoundly. The 2017 women’s marches broke American records for the largest protests, catalyzing a freshly urgent societal conversation around gender equity, women’s rights, and sexual harassment. “This time around, we just understood so much more that we’re a part of this greater movement,” says Megan Rapinoe, the team’s cocaptain and forward. “Coming home the first couple of days, I was like, ‘Oh, this is so much bigger than I even thought.’ ”

It has been 47 years since Title IX became U.S. law, prohibiting gender discrimination in schools and requiring sports programs for girls to be equivalent to those for boys. But women’s professional sports are still generations behind men’s, with fewer teams and generally smaller audiences. Pay equity is rare—and virtually nonexistent in team sports like soccer and basketball. Now the field is experiencing a reckoning, as athletes speak up for gender equality—and the women’s soccer team, whose dominance has given them the world’s ear, are leading the charge (and earning a special spot on our annual list).

The sports uprising is akin to the one the entertainment industry has confronted in the wake of #MeToo, as female actors who came forward about sexual assault began also campaigning for equal pay and better representation in front of and behind the camera. “There’s a moment in women’s sports, there’s momentum around our league, and there’s this movement around women’s empowerment,” says Cathy Engelbert, the former CEO of Deloitte and new commissioner of the WNBA. The convergence underscores why Time’s Up, the Hollywood-based organization created around #MeToo, partnered with the women’s soccer team this summer on a fundraising initiative aimed at helping all women close the wage gap. “We can sort of see ourselves in that,” Rapinoe says of Time’s Up.

The lawsuit against USSF is the first known instance of a professional sports team suing its employer for gender discrimination. U.S. soccer is unusual in that the same organization employs both men’s and women’s teams—which makes it easier, as a legal matter, to demonstrate unequal treatment. The women’s on-field success and popularity, meanwhile, have made their case more viable by giving it an economic underpinning. Since 2015, they argue, they have outperformed the men financially: For example, USSF projected that the women’s team would generate a $5 million profit in fiscal 2017, while the men would lose $1 million. Still, the USSF’s pay structure awards substantially greater compensation to the men. In 2014, the last time the men’s team was in the World Cup, they were eliminated in the round of 16, but thanks to various bonuses, they allegedly received roughly triple what the women got for winning it all in 2015. (USSF has denied that it discriminates, saying in a court filing that because the men and women compete “in vastly different spheres” internationally, “no comparison can be made between their respective performance and compensation.”) “It seems like [the lawsuit] was a step that this team was always destined to make,” says cocaptain Morgan, who plays forward. Adds Press: “The most important thing we could do to change the world and make the world a better place is winning.”

Already, the female soccer players have tangibly influenced other sports—inspiring other women to ask for better pay, even when equal pay is a long shot. This year, the World Surf League began awarding equal prize purses to men and women. In hockey, hundreds of women are currently refusing to play in North American pro leagues, demanding better compensation and playing standards. Kendall Coyne Schofield, who plays forward on the U.S. women’s national ice hockey team, consulted with women’s soccer players before deciding to boycott the 2017 hockey world championships amid a compensation dispute. “We looked at them and said, ‘If they can do it, we can do it,’ ” Coyne Schofield recalls.

At the WNBA, where the league is in the midst of negotiating a new contract with players, Engelbert says she’s committed to improving female players’ compensation and travel arrangements, though she cautions that “the economics of this league need to improve to support the players more.” Ultimately, she thinks elevating women’s sports will have benefits beyond just the game—by expanding opportunities for corporate sponsorship dollars (less than 5% of which goes to women’s sports today) as well as by inspiring women to achieve and lead.

Billie Jean King, the tennis legend whose advocacy helped bring equal pay to her sport decades ago, understands that dynamic. After she defeated male star Bobby Riggs in the famed “Battle of the Sexes” match in 1973, King says, she heard from women who felt compelled to ask their bosses for a raise the next day. “Sports is a platform for change,” she tells Fortune. “We can help this drive toward equality.”

A version of this article appears in the October 2019 issue of Fortune as part of the Most Powerful Women package with the headline “No. 51: Bonus Pick! U.S. Women’s National Team.”

—Most Powerful Women 2019: See who made the list
—Meet the women leading Netflix into the streaming wars
—Keep these 10 powerful women on your radar
—Former PepsiCo CEO Indra Nooyi aims to create a “sisterhood” of women leaders
—Wall Street has never had a woman CEO. Why not?

Subscribe to The Broadsheet, our newsletter on the world’s most powerful women.